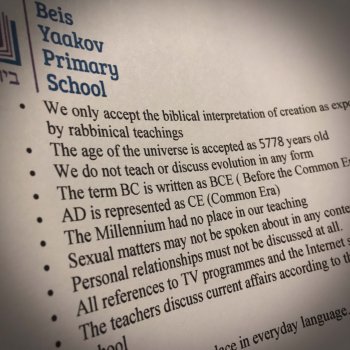 The National Secular Society has urged the Government to investigate a faith school that insists the universe is 5,778 years old and forbids any discussion of "personal relationships".

The NSS expressed concern after its research exclusively revealed the educational policies and codes of conduct at Beis Yaakov Primary School in Barnet. Beis Yaakov is a state-funded school for girls "from strictly orthodox Jewish families".

According to the voluntary aided school's visitors' guide, creationism is taught as fact, evolution is not discussed and pupils are taught that "the age of the universe is accepted as 5778 years old". (Since the publication of this piece the visitors' guide has been removed and replaced with a different version).

In a letter to the schools minister, Sir Theodore Agnew, the NSS says that "given evolution is now a part of primary science curriculum, the school's refusal to teach or discuss evolution in any form clearly indicates the school is in breach of its legal obligation and should face sanction."

The programme of study for the new National Curriculum in Science includes the statutory teaching of the theory of evolution to primary school pupils both in year 4 (age 8-9) and year 6 (age 10-11).

And in 2014 Edward Timpson, then parliamentary under-secretary for education, told parliament state-funded schools should avoid teaching creationism as scientific theory. "Outside of science lessons, it is permissible for schools to cover creationism as part of religious education lessons, providing that this does not undermine the teaching of established scientific theory," he said.

The visitors' guide gives an insight into the sheltered existence at the school. "Parents choose this school because our ethos closely mirrors the values and life styles of their homes," it says.

"The society in which our girls live is a very protected one. They do not watch television and many do not have access to national newspapers or libraries. Pop culture is unknown and exposure to other religious experiences very limited." For this reason, "all references to TV programmes and the internet should be avoided".

The school also has a highly restrictive code of personal conduct and dress code. The guide says "men and women may not shake hands nor touch in any other manner". Men must also avoid walking between two women and vice versa.

Skull caps or hats are compulsory for men, and women are forbidden to wear trousers. Women must wear tops that cover the collar bone and elbows and stockings or tights. Married Jewish women "must cover their hair".

The school also insists "personal relationships must not be discussed at all". The NSS says such a prohibition could place children at risk by denying them the knowledge and life skills needed to stay safe and develop healthy relationships.

The Society is now calling on the Department for Education to instruct inspectors to investigate whether this school "meets the requirements to receive public funding or even be registered as a school at all". Despite its failings, the school was rated "Good" by Ofsted in 2015.

Stephen Evans, NSS campaigns director, said: "The schools we all pay for should educate and open young minds, not indoctrinate them. Having an official policy stating that the age of the universe is 5778 years old clearly undermines the teaching of established scientific theory.

"Religious demands and parental preferences must no longer provide cover for the state to ignore children's independent rights. All young people should be entitled to the highest standards of education, regardless of their background.

"Any school that promotes creationist beliefs as fact, shields its pupils from modern technology and media, and promotes discriminatory dress codes is clearly unfit to teach."