Parents protest plan to merge non-religious school into Christian one 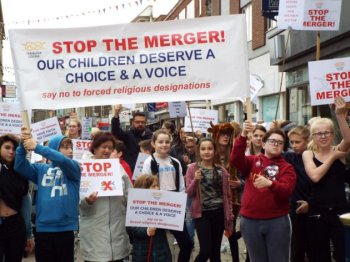 Parents and children have taken to the streets to protest plans to merge Trafalgar College, a school without a religious ethos, into the Christian Great Yarmouth Charter Academy.

Carrying banners and placards saying 'Say no to forced religious designations' and 'Our children deserve a choice & a voice,' the parents and children from Trafalgar College marched in protest on October 7th.

Louise Alderman, who chairs the Parents, Teachers and Friends Association (PTFA) at Trafalgar, was among the parents who raised concerns with the NSS. She told the Eastern Daily Press: "We're really pleased with how the march went and I think people understand the issues a lot better now."

The National Secular Society is supporting families at Trafalgar College who oppose the merger, and has written to the Inspiration Trust, the multi-academy trust that runs the two schools, to express its opposition.

The NSS is particularly concerned that Inspiration Trust is not fully representing the issues in its consultation page and FAQ document for the planned merger, which therefore biases the consultation. The consultation page does not appear to address the religious issues surrounding the proposals at all, while the FAQ document states that "Charter is not a faith school." The NSS believes this statement is misleading, as Charter Academy has a clear Christian ethos and therefore fits the general definition of 'faith school.'

The FAQ document also states that "there are more than 100 schools in Norfolk with a religious designation, without causing parents any concern." The NSS also believes the inaccuracy of this statement to be self-evident in the fact that the parents have clearly voiced their worries regarding the religious character of the Charter School. The NSS has also pointed out some of the issues surrounding religiously designated schools, including proselytization and subtle forms of bias.

Representatives of Inspiration Trust continued to make these potentially misleading claims at a consultation meeting with Trafalgar College parents on 28th September.

Adrian Ball, COO of Inspiration Trust, said, "It is not a faith school. The holy designation means that the underlying principles of the school are ones that kindness, politeness, understanding as per Christian faith that are in reality intermerged with any religious denomination."

In response to this, Stephen Evans, Campaigns Director at the NSS, said, "We are sure that all schools in Inspiration Trust aspire to 'kindness, warmth and fairness'. Conflating this with a formal religious designation – which is neither necessary for, nor always conducive to such aspirations – is misleading. I'm sure that Inspiration Trust would concede that a religious ethos is not necessary to for a school to teach the values necessary to develop kindness and understanding in pupils. It is misleading and divisive to frame such values as uniquely Christian.

"School reorganisations are always a matter on which there are strong opinions by all those involved, who would like the best outcome for pupils. The insistence on a religious ethos only makes these situations more difficult and divisive.

"It's really disappointing that yet again we see where there are school closures and merges, religious schools are expanded at the expense of community schools. At a time when religious adherence is rapidly diminishing its absurd to be expanding faith-based schooling. We urge the Inspiration Trust to drop the religious designation and ensure that local pupils have continued access to a secular and inclusive schooling."

UPDATE: In late October Inspiration Trust published its response to the consultation. It announced it had decided to continue with the proposal to apply a Christian religious designation to the merged academy.

The Trust said it had "carefully considered the responses to the consultation," including from the NSS.

"We feel that the designation reflects the views of the majority of the population, while continuing a light-touch practical approach ensures that those with other beliefs are not excluded," it said. It cited results from the 2011 census in defence of its case.

The Trust also said that "on a practical level, we consider that in terms of religion there is very little difference in the day to day operation of the two schools".

The NSS said it was "disappointed" by the decision. A spokesperson described the justification behind it as "very thin and based on selective evidence".