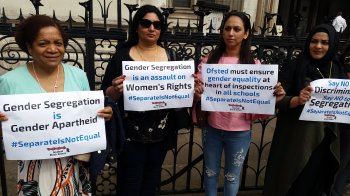 Amanda Spielman's words came as she announced that an Islamic school at the centre of a segregation row would be taken over by an independent academy trust.

"I am deeply concerned about the idea that total segregation of children within a mixed school is acceptable," Spielman said.

"We have single-sex schools and I am not challenging that. But the idea that you have… a mixed school and yet you do not have social development, stimulation, all the things that come from mixing the sexes, makes me uncomfortable."

This weekend Spielman announced that the Al-Hijrah school in Birmingham would find new management on the Department for Education's orders. The decision follows the publication of an Ofsted report which rated the school as "inadequate" – the worst possible ranking.

Al-Hijrah, which has around 750 pupils, was one of England's first state-funded Muslim schools. The school originally opened in Birmingham Central Mosque in 1998 to address the "problem" of Muslim children "not receiving a satisfactory standard of instruction in Islamic moral and religious matters" in state schools. In 2001 the school ceased being a private school and became a publicly funded voluntary-aided faith school within the state sector.

Boys and girls there are segregated throughout the day from the age of nine to 16.

Last year Ofsted inspectors visited the school and raised concerns about many leadership failings, including "too heavy involvement" by governors in the day-to-day running of the school, and concerns over gender segregation. They said the school had an unchallenged culture of discrimination against girls and LGBT people.

Last week the High Court heard an Ofsted appeal against that decision. The court has yet to deliver its verdict. If Ofsted wins, it will re-inspect up to 20 faith schools that teach boys and girls separately and could force them to change their arrangements.

Spielman said she decided to appeal because the case raised "a really important point of principle".

"What pupils were missing out on in Al-Hijrah was the chance to interact with the opposite sex, to prepare them for adult life."

The National Secular Society urged Ofsted to appeal the original ruling. The NSS also supported interventions by two women's groups, Southall Black Sisters and Inspire, which highlighted the role that Islamist ideology was playing at the schools.