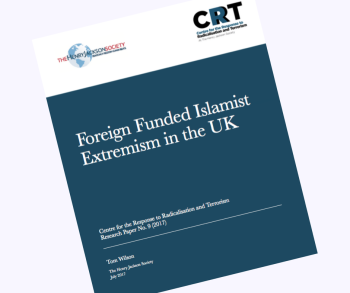 The National Secular Society has joined calls for a public inquiry into the funding of Islamist extremism in Britain after a damning investigation by a prominent think tank.

In a report published yesterday, the Henry Jackson Society said there was "a growing body of evidence" that foreign funding was contributing to terrorism in Britain and other western countries. It said the money comes mainly from governments and state-backed foundations in the Gulf and Iran.

It claimed Saudi Arabia was the chief foreign promoter of Islamist extremism in the UK. It said the Kingdom has promoted Wahhabi Islam "across the Islamic world, including to Muslim communities in the West" since the 1960s. It added that Saudi Arabia has spent at least £67 billion over the last 30 years in this endeavour.

Saudi Arabia has given endowments to mosques and Islamic educational institutions in the UK. These have then played host to extremist preachers and distributed extremist literature. British Muslim religious leaders have been trained in Saudi Arabia. Saudi textbooks have been used in a number of the UK's independent Islamic schools.

The report suggested the problem was much more widespread than has been publicly acknowledged. It cited "numerous cases" of British individuals joining jihadist groups in Iraq and Syria who are thought to have been influenced by foreign funded radical institutions and preachers.

Tom Wilson, the report's author, said: "There is a clear and growing link between foreign funding of Islamist extremism and the violent terrorism we have witnessed across the UK and Europe. Research indicates that some Saudi individuals and foundations have been heavily involved in exporting an illiberal, bigoted Wahhabi ideology."

Several other western governments have faced this issue in recent years. Last year, for example, intelligence agencies said some Gulf countries had undertaken a "long-running strategy to exert influence" in Germany.

The report said the UK government "should consider measures that would block certain funding altogether". But, it added, "it remains unclear what the government intends to do practically" to address the problem.

The society said an inquiry was justified because there was "a clear lack of publicly available information on this subject". Some have claimed the findings of an internal government investigation into extremism funding are being buried to prevent embarrassing Saudi Arabia.

Saudi Arabia's London embassy said the report's accusations were "baseless and lack credible evidence". The UK government said it was "determined to cut off the funding which fuels the evils of extremism and terrorism".

The Foreign Office said: "The government is determined to cut off the funding which fuels the evils of extremism in the UK.

"In 2015 the government commissioned a review into the funding of Islamist extremist activity in the UK, including any overseas sources. The review reported to the home secretary and prime minister in 2016 and it has improved the government's understanding of the nature, scale and sources of funding for Islamist extremism in the UK.

"Ministers are considering advice on what is able to be published in the report and will update parliament in due course."

Terry Sanderson, president of the National Secular Society, said: "Islamic extremism – or, come to that, Christian extremism – poses a threat to the rights of those who don't adhere to those particular beliefs. It needs to be challenged.

"Allowing foreign powers – however lucrative they might be as trading partners – to undermine our democratic system and the human rights that spring from it must stop. Saudi Arabia is a particularly egregious offender. Its plan to undermine the West through this kind of infiltration is clear to anyone with eyes to see.

"The time must come when we must put a value on the safety and unity of this country. It would be painful fiscally to sever ties with Saudi, but if the arms deals we have with them comes at the cost of our human rights and the cohesion of our country, then it is a pain we may have to bear." 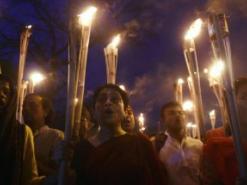 Secular writers are defiant after Bangladeshi Islamists stepped up their campaign of murders with a global death list.