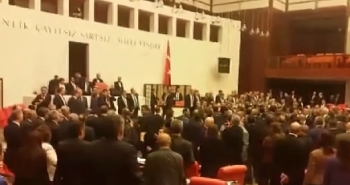 Turkish secularists have expressed their fears for the country's secular future ahead of a referendum to drastically increase the power of President Erdogan.

PBS reported on campaigners who are working to resist the Islamisation of Turkish state schools.

Aysel Celikel, head of the Society for the Promotion of Contemporary Life, told PBS that "the situation is of course worrying us because the political powers have said they want to raise a religious generation.

"With all these prayer rooms and small mosques opening up at schools with the kind of education they're offering they're really pumping this idea of a religious generation."

Turkish parliamentarian Safak Pavey, who was named Secularist of the Year in 2014, said the referendum was "critical" for secularism in Turkey. Earlier in the year Safak was thrown to the ground from her wheelchair, during a brawl in the Turkish parliament over the reforms.

Erdogan has said he seeks an "executive presidency". Last year he compared the presidential system he sought to "Hitler's Germany".

Campaigning for the April referendum spilled into a diplomatic crisis between Turkey and the Netherlands earlier in March. And following the Dutch election Turkey's foreign minister said a "collapsing" and "decaying" Europe would face religious wars.

"Soon there's going to be a holy war," Mevlut Cavusoglu said. "It's going to start."