MP calls for Scotland to embrace a secular education system 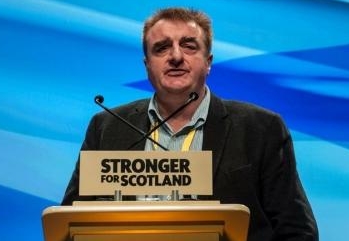 Tommy Sheppard MP has called for Scotland to move towards a secular education system and expressed his hope that secularist campaigners can "chip away" at religion's role in state schools.

The SNP parliamentarian was speaking to the Humanist Society Scotland for a fringe event at the SNP conference in 2016 but his comments have only recently been reported.

In his recorded comments he considered the "strategy to get [to a secular system]" and said progress had to be made "bit by bit".

He urged the audience, "Chip away at the power of organised religion has within our school system. Take those little victories and use them to move onto the next campaign were we actually advocate that the role of religion in schools is for people to learn about it about it but not for it to define the value system in the school."

In response to his speech the Bishops' Conference of Scotland said claimed that because religious belief is a protected characteristic under equality law, "it should not come under attack".

A spokesman said that it was a "blatant attack on religious freedom and chillingly intolerant."

Alistair McBay, vice president of the National Secular Society, said, "Genuine religious freedom should mean the right to not have religion imposed on you and your children through the education system.

"Tommy Sheppard has just called for a 'secular school system'. In many countries, such as the United States, that is totally normal. It is no infringement on religious freedom to say that religious schools should be funded by religious groups and not by the taxpayer."

The SNP distanced itself from Sheppard's speech, describing his remarks as "the personal views of Mr Sheppard."

The party said it was a "strong supporter of faith schools."

After the 2016 recording came to light and was reported Mr Sheppard said there were "excellent" faith schools in his constituency and that his comments were about "the composition of education authorities and whether it's right that unelected people should sit in those boards and make education policy in Scotland."

He added that while schools might have a religious ethos, "the content of the teaching [faith schools provide] should not … be conditioned by religious belief, particularly in sciences and humanities."

The NSS has welcomed a bill that proposes to scrap compulsory religious worship in non-faith schools in England.