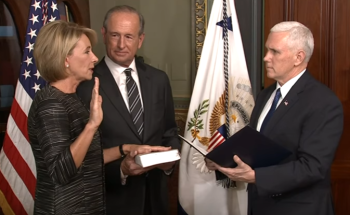 Americans United for Separation of Church and State has said it is disappointed after the Senate narrowly voted to confirm Betsy DeVos as the Secretary of Education.

DeVos was confirmed after an incredibly tight confirmation battle. Two Republican senators sided with Senate Democrats in a bid to block her confirmation.

After her confirmation Americans United (AU) released a statement vowing to oppose any attempt by the Trump administration to use voucher programmes and "school choice" schemes that "divert desperately needed taxpayer funds to private, mostly religious, institutions."

AU said it "vowed to oppose any attempts by DeVos and President Donald Trump's administration to defund public schools by redirecting taxpayer dollars to private schools that lack accountability and typically perform no better – and sometimes worse – than public schools."

The group also cited concerns that "vouchers will be used at private religious schools that teach religion, such as creationism and [an] anti-LGBTQ curriculum. AU notes that these schools don't provide the same civil rights protections – including those that protect students with disabilities and young women against discrimination – that public schools do."

When challenged over her support for an organisation that supported a school district which used a biology textbook that featured intelligent design, De Vos said that she was in favour of "critical thinking".

But Professor Robert Pennock told Pro Publica that 'critical thinking' was used as a code word for introducing intelligent design as an 'alternative' to evolution.

Pennock said that DeVos "evaded what should have been a simple question about not teaching junk science" and that she "did so in a way that signalled her willingness to open the door to intelligent design creationism."

The Secular Coalition for American said the Senate had voted "to entrust the education of our young people to an ideologue who devoted her philanthropic career to funnelling money from public schools that serve all students into private religious schools that serve a select few."

They praised the two Republican senators who voted with the Democrats for putting "their duty to their constituents ahead of party-line politics."