Help celebrate our 150th anniversary and support our appeal! 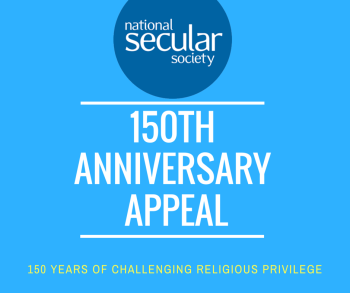 Terry Sanderson, president of the National Secular Society, said the tasks of campaigning for a secular state were "becoming more demanding" and that the Society needs to be "as well-resourced as possible."

"To better equip us for the growing challenges of the future we are launching a 150th anniversary appeal with a target of £200,000.

"In order to maintain our independence we do not receive, nor do we seek, public funds. We rely entirely on contributions from you, our members and supporters. You are the NSS.

"Help us achieve our ambitions for a bigger and more influential NSS in the future."

The appeal will go towards commemorating the founder of the National Secular Society, Charles Bradlaugh, who will be honoured in parliament by a portrait bust which will be unveiled later this year, and to the Society's 'Secularism 2016' conference in September.

In a letter to the Society's members, Mr Sanderson wrote: "We want to ensure that Bradlaugh – one of the most effective politicians of the 19th century – is not forgotten, particularly in the parliament that he struggled so hard to be part of. We have, therefore, commissioned a life-sized portrait bust of the great man.

"And the exciting news is that Parliament has agreed to give it a prominent place in the Palace of Westminster where it will serve as a reminder of Bradlaugh's fantastic contribution.

"He was elected as Member of Parliament for Northampton in 1880, but it was only after a momentous struggle against the religious establishment that he was able to take his seat in 1885. He subsequently became widely known as a social reformer and for his work on the Oaths Act. It is thanks to Bradlaugh that MPs can affirm in Parliament today.

"The life size bust will be prominently displayed in a public area of Parliament as part of its permanent collection and can be used as the focus of education about Bradlaugh and secularism."

In addition to the commemoration and bust of Charles Bradlaugh, remaining money from the fund will go towards supporting NSS campaigns for an inclusive, secular education and to supporting our national and international work.

Mr Sanderson continued: "We remain very active both in the UK and internationally, including at the United Nations – where we have recently been recommended for consultative status – working towards a society where religion and state are separate and in which all citizens, regardless of religious belief, or lack of religious belief, can live together fairly and cohesively."