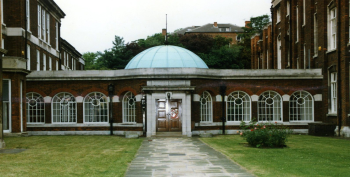 An independent Muslim girls' school with a "strong emphasis" on Islamic studies has been downgraded to "inadequate" by Ofsted.

Ofsted inspectors found that the Jamia Al-Hudaa Residential College did not give pupils sufficient access to books about "different faiths or British history" and it strongly criticized the management of the school.

The report noted that "half the curriculum" is "devoted" to Islamic studies and the school's website says that it aims to "develop the Islamic personality in our students so that they will be able to apply the Qur'an and Sunnah in their daily lives."

The school was praised for "good" pupil behaviour but inspectors noted the use of "disproportionate sanctions", including £20 fines for having chewing gum and "fixed-term exclusions for possession of a mobile phone".

One former pupil said the school management was "utterly cruel".

Aliyah Saleem, who now campaigns for secular education and for pupils to be protected from religious dogmatism in independent and state schools, welcomed the College's downgrading by Ofsted but warned that "very little was said in regards to how restrictive the curriculum is with subjects such as music, art, history and geography not being taught".

She also that the Government had "stood by and ignored the utterly appalling imposition of conservative religious ideologies on British school children".

Saleem wrote that she was branded "Islamophobic" by other pupils who attended the school after she criticized it.

The Ofsted report praised Islamic studies at the school, which takes up half of the school day, while criticizing the restrictive provision of library books: "The library has a limited range of books for pupils to use for personal reference and study. There are insufficient books about religions, other than Islam. History books are also limited to Islamic history".

The report said there was a "strong emphasis on Islamic studies".

NSS campaigns manager Stephen Evans commented: "Ofsted inspectors frequently praise religious studies at independent faith schools like this, downplaying how badly students are let down by an absence of a proper education in the humanities, arts and science.

"It's clear that an over-emphasis on religious instruction at this school has prevented students from receiving the kind of broad and balanced education they should expect from any educational establishment. Schools should broaden students' horizons, not limit them with narrow teaching and rigid religious rules."

Careers guidance was an area of particular weakness, with the College offering "no impartial advice" and pupils receiving "little or no information about careers other than those related to teaching Islamic Studies."

The school was praised for its students doing "exceptionally well in GCSE Arabic" and Arabic was also said to be one of the "best examples" of teacher marking, with pupils receiving "detailed correction of their work". However in other subjects marking is "less good" with the use of "ticks only" in some lessons, and inspectors even found that "on occasion the marking is inaccurate".

While the teaching of both Islamic studies and Arabic is repeatedly praised by Ofsted, other subjects are neglected at the school and pupil "misunderstandings" in English, mathematics and science are often left unclarified by teachers, the inspectors said.

The school's mission statement says the College aims to "provide the best possible education in an Islamic Environment through the teachings of Islamic Sciences and the National Curriculum".

Ofsted also made numerous critical observations about staff competence at the school, noting that "leaders are unclear of all their responsibilities" and that background checks had not been performed at the time of the inspection.

They wrote that before inspectors arrived "school leaders had not completed all the necessary checks on every member of school and boarding staff."

Though school leaders "remedied most of these by the end of the inspection" the report raised the alarm that "safe recruitment checks are missing for staff who have lived overseas and those that have gaps in their employment history."

Inspectors said that the "school's arrangements for safeguarding do not meet requirements."

In a testimonial on the school's website, one student is quoted saying; "I am running out of words to describe it [the school]. I do have a spirit to live and die for Jamia. So my life and death lie in Jamia. Jazakallah Jamia."