Muslim-majority school to integrate genders, despite protests from parents 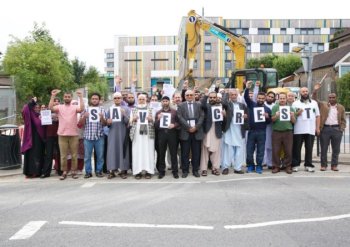 A Muslim-majority, non-faith school is to integrate boys' and girls' classes for the first time, after being placed in special measures by Ofsted.

The Crest Academies in Brent, a secular, non-denominational school which has previously taught the genders separately, has faced protests from parents after the headteacher announced plans to teach boys and girls together as part of his bid to turn the failing school around.

A petition against the move drew nearly three-hundred signatures with petitioners listing a number of reasons for rejecting the move, including one who said "I am signing this because my younger sister [will] be attending the school and I do not wish for her to be exposed to the other gender as I am a MUSLIM male who does not approve of this."

He added that the reason she applied to the school was "the segregation" of students by gender.

Many other petitioners objected because the school had a history as two separate institutions, with distinct boys' and girls' school, or over fears that integrating teaching would lead to poorer outcomes for female students.

Another petitioner said "boys and girls should be in separate building" and one warned that parents wouldn't send their children to a mixed school. "Crest has always been segregated and should always be like that," said one complainant.

The petition said that Brent was one of the most "diverse communities in the UK" with a range of cultural and religious "preferences".

An Ofsted inspection in January 2015, which rated the school as inadequate, said: "Boys and girls are separated for teaching, in the playgrounds, at lunchtime and around the Academy. This limits opportunities for them to work together, socialise and learn to get on."

There were also marked differences in attainment between male and female pupils. Ofsted found that "boys' attitudes to learning are not as positive as those of girls" and that girls' "progress in English is better than that found nationally." The inspectors made several criticisms of boys' teaching, and noted that marking was "generally better in girls' books."

The Crest Academies were formed from a merger of the Crest Boys' and Crest Girls' academies, and Ofsted noted that while the minimum standard was met by the former girls' Academy, it was not by the boys' and the combined school did not meet the required standard either.

In spite of the difficulties the school faced, "parental preference rather than educational value" resulted in the continued gender separation in the merged Academy, and Ofsted noted that "this approach does not promote equal opportunities for all."

Inspectors also criticised the "separate teaching of personal, moral and cultural development" which they said "limits opportunities for social interaction and debate between boys and girls". This arrangement was failing to prepare students "fully for life in modern Britain", they reported.

Despite combining the two academies, students were still segregated by gender and taught separately. Headteacher Mohsen Ojja has now initiated reforms and wrote in the TES that he had a "moral duty" to "prepare young people for modern Britain" and that things at the school "had to change" after the sharply critical Ofsted report.

"One year on, we have revisited the decision to educate boys and girls separately, and the start of the new school year will see the emergence of the Crest Academy, offering co-education for the first time."

He added that move had not been "without controversy" and said that parents had been much less supportive than students and staff. The Brent and Kilburn Times reported that there was "anger" from parents over the plans, back in July.

"The move to a single, multi-faith, proudly diverse school is the first important step to integration. Moreover, I am the principal of a secular, non-denominational school that has a large majority of Muslim students. This does not make the school a Muslim school where segregation of gender should be pursued."

National Secular Society campaigns manager, Stephen Evans, commented: "It's encouraging to see the headteacher stressing the secular nature of the school and taking a principled stance in the face of unreasonable demands for religiously based gender segregation. Religious considerations shouldn't be placed above the educational needs of pupils, nor should gender segregation be considered acceptable for religious reasons in a state school."