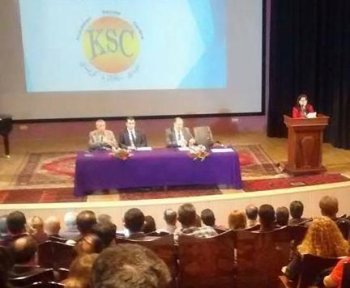 The Kurdistan Secular Centre (KSC) is appealing for international help and support to promote secularism and the separation of religion and state.

The KSC was established earlier this year in April 2015, and was initiated by Iraqi intellectuals, trade unionists, academics, activists and human rights campaigners.

In a statement sent out by the KSC asking for support and solidarity, the Centre notes that Islam is cited in the draft constitution as the "main source of legislation" and that the religion has very "great influence" in the penal code.

The KSC write that the law discriminates against women and forms a barrier "to the creation of a culture of equality and human rights."

A spokesperson for the NSS said: "We see secularism as a core human rights issue. It is hard to think of a region in more desperate need of secularism and the Kurdistan Secular Centre are doing vital work."

"This system of law tolerates, openly or in effect, practices such as female genital mutilation, [forced] marriage, inequality in divorce, child custody and inheritance, punishment of women for 'adultery', denial of abortion rights and allowing a rapist to escape punishment if he agrees to marry the victim. This discrimination facilitates a massive amount of violence against women and girls," the Centre warns.

There also serious concerns from the KSC about the education system and the "huge role" played by religion in schools. The Centre has warned that children are "taught an ideology that warps their development socially and psychologically" and that "dozens of religious schools have been established."

"Because of the power religion is gaining over individuals and over the life of society, freedom in general is limited. Intellectuals, critical thinkers, apostates, writers, poets, journalists, women's rights activists and other political dissidents are constantly under threat and sometimes physically attacked. We have even seen assassinations by Islamist activists. Meanwhile the state in effect justifies this situation by threatening those who criticise religion with imprisonment."

Chillingly, the KSC notes that "the entrenched and growing strength of religious reaction in society meant that there were actually those in Iraqi Kurdistan who [support] ISIS." Hundreds of Kurdish youth have joined the Islamic State, the KSC reports.

The KSC has some cause for optimism however, while faced with great difficulties, their statement notes the broad support they draw from "millions of people who are deeply secularist" including secular Muslims who are "forward-thinking" and the millions who "long for greater personal freedom, for freedom of speech and expression, for equality and human rights."

"Despite the drive of Islamic reaction, women study, work and take part in politics as never before." The KSC adds that "demonstrations have been held against religious figures and organisations encouraging or justifying violence against women."

The organisation has drawn up a "Charter for Secularism in Kurdistan" which argues for the complete removal of religion from the constitution, one law for all, gender equality and the protection of freedom of "speech, expression, criticism, research and thought, creativity and invention."

The Charter calls for a secular education system and for the state to cease funding religious institutions.

To help build support for their struggle, the KSC are asking that "all likeminded organisations and individuals in Kurdistan … join the Centre and add their names to the Charter."