MP: “If you despise our Christian values, please leave and go somewhere else” 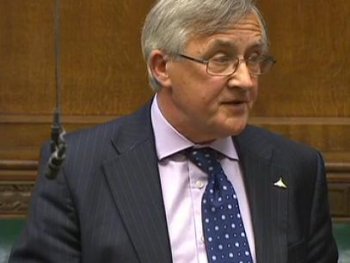 Conservative MP Sir Gerald Howarth, speaking in the House of Commons, has claimed that "we are a Christian country"- days after yet more research showed that the non-religious are the single largest group in Britain.

Speaking in a debate on "Britain in the World"- part of the Commons' debates on the Queen's Speech, Sir Gerald said, "We are a Christian country: if you despise our Christian values, please leave and go somewhere else."

The Conservative MP, recently re-elected, was commenting on immigration when he warned: "Our services simply cannot continue to accommodate a quarter of a million new arrivals a year, quite apart from the serious cultural issues arising from people taking advantage of our liberal society while seeking to impose their medieval ways on us."

New data from the National Centre for Social Research found that 49% of Britons have no religious belief, making them by far the largest single group in the UK, while those who describe themselves as Anglicans make up just 17% of the population.

NSS campaigns manager Stephen Evans commented: "His remarks are completely at odds with reality in Britain today. By some measures, Sir Gerald is excluding around two-thirds of the population from his definition of who belongs in Britain.

"What are 'Christian values'? The phrase is as ambiguous as 'British values'. We're going to need to find more inclusive language if we want people to buy into notions of shared citizenship and universal values.

"While there are significant problems around integrating religious minority groups into wider society- appealing to this outdated notion of Christian nationalism is completely wrong, inaccurate and counter-productive."

Over Easter, David Cameron claimed the UK was "still a Christian country", at the same time that polling found 62% of Britons describe themselves as non-religious.