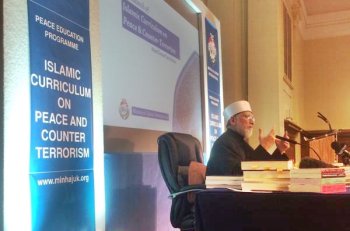 An Islamic scholar has released an extensive syllabus for use by teachers and children which seeks to rebut extremist Islamist ideology.

At an event in Westminster on 23 June 2015, Dr Muhammad Tahir-ul-Qadri launched the "Islamic Curriculum on Peace and Counter-Terrorism", a wide-ranging series of books which emphasise peaceful teachings within the Islamic tradition.

It was described as an "ideological answer" to the interpretation of Islam propagated by ISIS.

The books were well received at the event, and several leading imams declared that they would begin using the curriculum in mosques.

Dr Qadri said both Muslim and non-Muslim students should study the work and called for it to be used in schools as well as mosques and madrasahs – a call backed by the former minister for faith Baroness Warsi.

When asked if he feared becoming a target for Islamic State, Dr Qadri insisted he would continue promoting his rebuttal of Islamic State's theology.

An NSS spokesperson who attended the launch event commented: "It is obviously in the interests of those wishing to live in a secular society that a growing religion with a large number of adherents should manifest their religion peacefully.

"While non-believers and non-Muslims will form their own view of Islamic scripture, we do welcome this significant effort by such a large number of Muslims to tackle some of the root ideological problems which cause radicalisation.

"It should never be forgotten – and was stated repeatedly at the launch event- that most victims of Islamist terror are Muslims. It was very pleasing to see such a large number of Muslim leaders denouncing terrorism so comprehensively. Dr Qadri appears to have been personally courageous in publishing such a high profile and extensive rebuttal of Islamic State.

"Our only concern is that, while pushing this counter-narrative is vital, some policy-makers at the event did seem convinced that there is no valid theological underpinning for violent extremism at all, or that terrorism is always a 'perversion' or 'distortion' of Islamic teaching. It was even said at the launch event that no religion justifies violence.

"While we want to see a peaceful narrative triumph within the faith for obvious reasons, it is palpably dishonest to completely separate Islam from Islamic terrorism. Equally, in the long-term, for a counter-narrative to succeed, it must be acknowledged that there is a competing scriptural claim to the one Dr Qadri set out. Genuine reform requires recognition that serious problems exist.

"While it is right to say that most British Muslims completely reject Islamic State, it is worrying to see some senior policy-makers seemingly refuse to accept the role religion can play in violence- and that this often does have some grounding in scripture.

"It does seem that in this, and in other matters, many policy-makers can have an uncritical positive regard for religion and view any religious violence as a distortion or deviation."

Imams and Muslim leaders from many traditions and countries at the event welcomed Dr Qadri's work, which is seen as his most important contribution to the debate around radicalisation and Islamic extremism since he published his 2010 religious ruling against terrorism.

Update 26/06/15: There are allegations that Dr Qadri supported Pakistan's blasphemy law, and the National Secular Society reiterates its comment above, that genuine reform requires recognition that serious problems within Islam exist: such as the severe penalties for blasphemy and apostasy that Dr Qadri is alleged to have once advocated for. Support for a blasphemy law is fundamentally inconsistent with any manifesto against religious extremism.