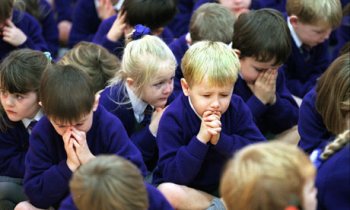 The obligation on state schools in England and Wales to provide a daily act of collective worship should be scrapped, according to former education secretary Charles Clarke.

In a series of suggested reforms, he called for a new national syllabus for teaching religion and claimed the phrase religious education should be changed, suggesting 'religious and moral education' as an alternative.

Mr Clarke made the recommendations in a report on the future of religion and RE in schools by Westminster Faith Debates.

The report, co-authored by Linda Woodhead, professor of politics, philosophy and religion at Lancaster University, stops short of calling for an end to religious discrimination against pupils in faith school admissions but says more should to be done to develop fairer admissions procedures.

The law in England and Wales provides that children at all maintained schools "shall on each school day take part in an act of collective worship". Even in schools with no religious designation, the worship must be "wholly or mainly of a Christian character".

The National Secular Society, which has been advocating the removal of compulsory worship for decades, welcomed some of the report's findings, calling the policy proposals a "positive step in the right direction".

Stephen Evans, NSS campaigns Manager, said: "The role of religion in schools needs to be thoroughly reviewed. The obligation on schools to provide worship is an anachronism; the legacy of a society unrecognisable from the diverse and pluralistic Britain of today where citizens hold a wide variety of religious beliefs, and increasingly, no religious beliefs whatsoever.

"School communities, even in schools with a religious character, are made up pupils from a variety of religion and belief backgrounds. These are places of learning, not places of worship and this report goes some way to recognising that.

"If we are to teach religion in schools, we certainly need a much more objective and even-handed approach. Religious education should be absorbed into a new National Curriculum subject under a different name that covers a variety of religious, non-religious and secular philosophies and worldviews", said Mr Evans.

Mr Evans added: "We must go further and challenge the whole concept of faith schools. Religious identities are not a good, logical or just criteria to organise schooling around. What we really need is a fully secular, inclusive and fair education system that teaches pupils about religions and beliefs with no attempt to inculcate them into a particular faith."

Charles Clarke, who served as education secretary from 2002 to 2004, said religion in schools must be re-examined "in the light of contemporary beliefs and practices, illuminated by the latest research".

"On this basis we propose a new educational settlement which can better foster genuine understanding of modern religion and belief, and allow young people better to explore their own and other people's religious and non-religious beliefs and come to their own conclusions", he said.

"The current requirement in statute for an act of collective worship should be abolished, and the decision about the form and character of school assemblies should be left to the governors of individual schools," he wrote.

The former Labour MP also called for a religious and moral education syllabus to be determined by the education secretary in agreement with a newly created advisory council consisting of experts on religion and education. This would follow formal consultation with representatives of religions, humanism and other belief systems.

Responding to the policy proposal, Reverend Nigel Genders, the Church of England's chief education officer said the Church "strongly supported the statutory requirement for collective worship in all schools".

He said the Church remained committed to the provision of high quality RE in schools, which he argued was "vital for a balanced understanding of the world today where more than 80% of the population are people of faith".

The Department for Education responded to the report by saying RE was "vitally important to help children develop the British values of tolerance, respect and understanding for others".

A DfE Spokesperson added: "Faith schools are an important part of our diverse education system, allowing parents to choose to have their child educated in line with the tenets of a faith".