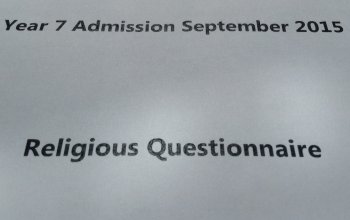 The NSS has urged the Government to resist regressive demands to allow more discrimination in faith schools after it emerged the Catholic Education Service is lobbying "hard" to remove the cap on faith-based admissions to academies – and is hopeful that the Government will revisit the issue.

Currently, new academies run by the Catholic Church are not permitted to admit any more than half of their pupils on the basis of religion. The Catholic Church in England and Wales is now said to be "hopeful" that the new Conservative-majority Government will allow academies to admit many more children on faith grounds by lifting the cap.

Under the Coalition, the Liberal Democrats had insisted on the 50% limit. The cap on faith-based admissions was the cause of infighting in the previous government, and on one occasion Vince Cable, then Business Secretary, accused the Department for Education under Michael Gove of a 'betrayal' after the DfE "ensured schools could be more than 90% Catholic."

In 2011, the then Education Secretary Michael Gove urged Catholic schools to avoid "unsympathetic meddling" by secularists by taking up the Government's offer of academy status.

The Tablet reports that Greg Pope, head of Parliamentary Relations for the Catholic Bishops' Conference of England and Wales, said: "We hope that with a Conservative Government [the cap] will be revisited, and it is something that my colleagues in the CES [Catholic Education Service] have raised with ministers."

A recent report by the Social Integration Commission warned of "social segregation" and called on the DfE to only approve new faith schools "when the petitioners have a clear plan for pupils to meet and mix with children from different faith backgrounds and communities." The report said that "highly diverse areas are not necessarily integrated" and noted that "increased numbers of children [are] being educated in peer groups dominated by a single faith group or community".

National Secular Society spokesperson, Stephen Evans, commented: "Any admissions arrangements to publicly funded schools that discriminate on grounds of religion or belief are clearly unfair and undesirable. Separating children on the basis of their parents' faith is no way of building a cohesive society or preparing young people for life in modern Britain.

"While the cap on faith-based admissions may in some cases ensure that pupils in faith schools are not totally isolated from children of other backgrounds, a new problem is created whereby non-religious parents, or parents who don't share the faith of the local school, find their children assigned by local authorities to a school with a faith ethos that runs counter to their own.

"In the long-term the only real solution is to have a secular and inclusive education system which isn't organised around the religious beliefs of parents. In the meantime, we will be urging the Government to resist regressive demands to allow faith schools to select even more pupils on the basis of their parents' religious beliefs and activities."

Mr Evans added: "If the 50% free school cap is removed, it is highly likely that the 'social segregation' fuelled by faith schools will be made worse."

In 2013 Professor Ted Cantle warned that pupil segregation is "getting worse". He said: "Segregation by faith and social class has been added to that of ethnicity. And the worst culprits seem to be the very institutions that claim to bring us together – religious schools."

Professor Cantle has also argued that religious selection in school admissions will "reinforce prejudices and stereotypes."

Meanwhile, the only free school in Cornwall, St Michael's Catholic secondary school, is to be "swallowed up" by an academy, after the school was found to not be "a viable proposition." The school cost taxpayers £4.5 million, and opened with just 60 pupils in 2012.