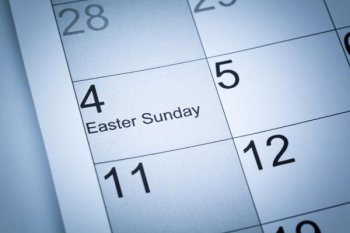 The National Secular Society has written to David Cameron, urging the Prime Minister to fix a set date for Easter and relax restrictions on Easter Sunday opening times for large stores.

The law currently requires large shops, such as supermarkets, to close on Easter Sunday, and the lack of a fixed date is difficult for businesses and for the planning of school terms.

The date of Easter currently varies by over a month and the proposal to fix the date has been backed by the Local Government Association and the Family and Childcare Trust.

The Independent reported a fixed weekend for Easter "could save cash-strapped parents hundreds of pounds in childcare costs, help businesses plan holiday rotas, and let the travel industry prepare better for surges in family holidays."

In the letter to the Prime Minister, NSS executive director Keith Porteous Wood pointed out that the Easter Act 1928 allowed for a fixed date to be set, but that no action had ever been taken since the legislation was given Royal Assent. Mr Porteous Wood also made clear that the Catholic Church had approved a fixed date in 1963.

"We noted that the Conservative member for East Yorkshire was the latest Parliamentarian to ask about bringing into force a fixed date for the Easter under the Easter Act 1928, in PQ 227857 answered on 24 March. The Catholic Church similarly paved the way for a fixed Easter at the Second Vatican Council in 1963. In both cases this was subject to consensus being reached. We invite you to encourage renewed attempts to reach such a consensus.

"You will be aware of the precedent set by a Conservative Government in 1971 with the Banking and Financial Dealings Act, under which the similarly itinerant Whitsun was replaced by the (fixed) late spring bank holiday."

Sir Greg Knight, who raised the matter with ministers in Parliament shortly before it was dissolved, said that "it does seem a bit odd that, 87 years after Parliament agreed that Easter should be on a fixed date, we're still waiting for the churches to make up their minds. This has been on the statute book for a long time."

Business minister Jo Swinson said there was "no indication" that churches would agree to a fixed Easter weekend.

The NSS wrote: "We support the rights of those who wish to observe Easter, but it is unreasonable and disrespectful to the remainder of the population for the operation of the law to prevent them from shopping then in such outlets. It is also an unwarranted restriction on business. If you remain as PM after the Election, we ask that you take steps to allow shops to open on Easter Sunday as they do on any other Sunday of the year."

The appeal to establish a fixed date for Easter came as new polling by YouGov found that only 13% said religion was the most important thing about Easter, and as many as 83% said they were not planning to attend Church over the Easter break. The poll also found that 62% of people described themselves as "not religious", compared with 36% who said they were. 68% said religion was "not important" to their own life.