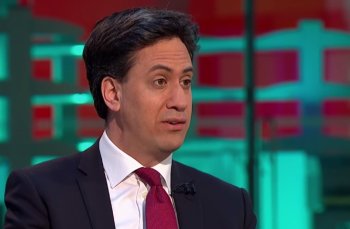 The National Secular Society and other advocates for freedom of expression have expressed alarm after Labour leader Ed Miliband set out his intention to 'outlaw' Islamophobia.

"We are going to change the law on this so we make it absolutely clear … our abhorrence of hate crime and Islamophobia. It will be the first time that the police will record Islamophobic attacks right across the country."

"We will challenge prejudice before it grows, whether in schools, universities or on social media. And we will strengthen the law on disability, homophobic, and transphobic hate crime."

Wright said "defenders of freedom of speech should be alarmed" at the "nebulous" proposal put forward by Ed Miliband, because they seemed to imply a return to the then-Labour Government's attempt in 2006 to "criminalise 'deliberately insulting' a religion."

The article noted that Ed Miliband himself voted for the original, defeated wording of the 2006 Racial and Religious Hatred Bill (now Act)- which would have seriously impinged free speech.

NSS campaigns manager Stephen Evans commented: "There already exists a distinct offence of religiously aggravated hate crime that carries a maximum 7 year tariff. We all want to prevent bigoted attacks on people, but given how tough the law is already – this sounds like Ed Miliband may want to revisit the 2006 legislation on 'insulting religion'. If so he'll be challenged every step of the way.

"'Islamophobia' is a highly contentious and nebulous term, and at the very least, Mr Milliband needs to define what he is intending to outlaw."

NSS honorary associate Maajid Nawaz, who is a Liberal Democrat parliamentary candidate, said "no idea is above scrutiny" and described the vague proposal as "illiberal."

Professor Richard Dawkins, also an honorary associate of the NSS, has been drumming up opposition to Mr Miliband's comments on social media and called on him to explain his plans. He asked if the proposed law would prosecute Charlie Hebdo and said that if it wouldn't "it would be useful" to have a clarification of the Labour leader's comments "to explain why not."

Dealing with the confusion around the term 'Islamophobia', Professor Dawkins said he thought Ed Miliband was against violent attacks against people and anti-Muslim bigotry, for which there were already applicable laws, but asked, "why privilege religion?"

He challenged Ed Miliband on Twitter over whether he could "go to jail" for quoting Islamic scripture which says, "Whoever changed his Islamic religion, then kill him."

In 2006 the National Secular Society worked along with campaign groups including the Christian Institute, and campaigners such as former Lib Dem MP Evan Harris, against the original wording of the 2006 Act, which was described at the time by the NSS as "draconian" and a "huge blow to freedom of expression." Ultimately, after a narrow single-vote defeat, a much more watered-down version of the legislation was passed into law.