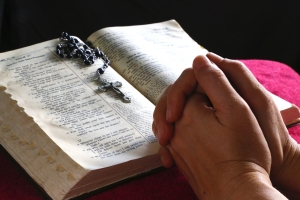 A UCL Institute of Education study of 9,000 Britons in their forties has found that women are far more likely than men to be religious believers, whilst more than half of the men surveyed described themselves as atheists or agnostics.

Nearly half of those involved in the survey did not identify with any religion, whilst the remainder said they had a "Christian background." Smaller numbers identified as Muslims, Jewish, Hindu, Sikh or Buddhist.

The survey called upon members of the 1970 British Cohort Study, a longitudinal study funded by the Economic and Social Research Council, in which participants have been asked about their religious affiliation, health, physical, educational and social development and economic circumstances over the course of their lives.

The survey also pointed to very high levels of religiosity amongst British Muslims. Though there was only a small sample size of 82 British Muslims in the study, 88 per cent said they "knew God really exists and had no doubts about it."

Meanwhile, absolute belief in God's existence varied significantly among different Christian denominations. 71 per cent of those who called themselves "evangelical" had no doubts about the existence of God. Just 33 per cent of Roman Catholics had no doubts, whilst just 16 per cent of those affiliated with the Anglican, Methodist, Presbyterian and United Reformed churches said they had "no doubts" that God exists.

The results were described by Professor Voas, of the Institute for Social and Economic Research at the University of Essex, as "characteristic of Europeans generally" in levels of belief or disbelief.

Professor Voas, who analysed the survey responses, said; "A substantial proportion of teenagers who reported that religion was an important part of their lives at age 16 became relatively unreligious adults. There is some movement in the opposite direction, but not nearly enough to compensate for the losses to religion."