Religion continues to cause disruption in 'Trojan Horse' schools 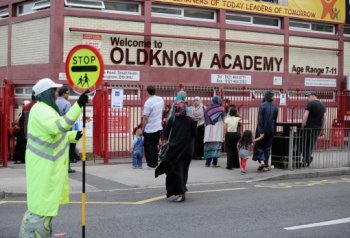 A school placed in special measures following the Birmingham 'Trojan Horse' affair has received 100 letters from parents requesting that their children be withdrawn from collective worship, it has emerged.

The revelation came in a report from Ofsted following a special measures monitoring inspection of Oldknow Academy – one of the schools involved in the 'Trojan Horse' scandal.

Nothing in the report suggests why the requests have been made, and the school itself has not revealed why. However, according to the report "plans have been started to ensure that assemblies and personal, social and health education (PSHE) create opportunities to foster an appreciation of, and respect for, different faiths and cultures". It is believed that some parents are opposed to these new measures.

Two weeks ago, police had to be called to another school, after a head teacher was confronted by a group of parents who objected to elements of the PSHE syllabus.

Prior to the Trojan Horse investigations, Oldknow Academy held two Islamic faith assemblies each week and optional Friday prayers. Birmingham City Mission had been delivering Christian Acts of Collective Worship at Oldknow, once a term, but these were cancelled, as was the academy's Christmas special assembly.

It has also emerged that a visit to Saudi Arabia had recently taken place for pupils and staff, despite a similar trip last year receiving criticism from inspectors due to failures in safeguarding. Trustees were not aware of the trip and had reportedly been misled by senior leaders at the school that the visit had been cancelled.

The inspection report, which has been sent to the Secretary of State for Education, Nicky Morgan, says it is difficult to indicate ways in which the academy had changed for the better since the previous inspection.

According to its Monitoring Inspection Report under Section 8 Education Act 2005, Park View School has done little to "discourage segregation and to encourage boys and girls to sit together in lessons and share opinions and ideas".

At Saltley School, it was claimed that some staff "segregate themselves into groups based on their religious beliefs" and this has not yet been addressed by senior teachers.

At Golden Hillock School, religious education GCSE students have to "teach themselves for options other than Islam", putting them at a "significant disadvantage". There was an example of a supply teacher conducting an RE lesson that was "not part of the school's religious education curriculum", with senior leaders of the opinion that "aspects of the lesson appeared to promote an inappropriate Islamist ideology".

In a letter to the Education Secretary, Ofsted chief Sir Michael Wilshaw said "too much poor practice remained unchallenged during the summer term".

A spokesperson at the DfE said the Ofsted reports were "a snapshot" and that it expected "rapid and effective" change from the new leadership teams.

"Untangling religion from schools is not going to be easy, but it is necessary if we are to ensure that our publicly funded schools provide a broad and balanced education in an environment that is inclusive and equally welcoming for all pupils."