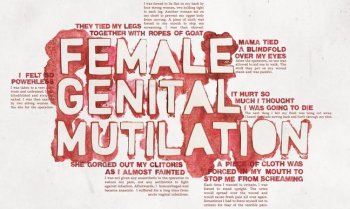 Under an amendment to the Serious Crime Bill, children at risk of FGM could be made to surrender their passports to prevent the practise known as "vacation cutting", in which girls are taken abroad during school holidays and subjected to FGM in countries in Africa and the Middle East where genital mutilation is widespread.

Additionally, the amendment will create a new criminal offence of failing to prevent a girl from falling victim to FGM. Parents or guardians who "fail to protect" their children from genital cutting could face prosecution under the new law. Justice Minister Mike Penning said that the Government wanted "to prosecute those who knowingly let this terrible abuse happen to children they are responsible for".

The amendment also provides for the lifelong anonymity of FGM victims in the hope that this will induce more victims of genital cutting to come forward. The Government hopes this will increase lacklustre rates of conviction for an evidently widespread crime. NHS data released last month revealed that 1,700 women and girls with FGM have been treated in hospitals since April. At least 137,000 women affected by FGM are thought to be living in England and Wales. However, to date only one criminal prosecution for perpetrating genital mutilation has ever taken place in the UK; this trial will start in January 2015.

The new measures will allow individuals to apply for "FGM protection orders" if they believe a child is at risk. Under such an order a child at risk of FGM could have their passport confiscated to prevent their being subjected to genital mutilation abroad; a mandatory medical examination to determine if FGM has already taken place and a requirement that the child remains at one fixed address.

A spokesperson for the National Secular Society welcomed the attempt by the Government to curtail FGM, which has been documented by the World Health Organization in 28 countries around the world, affecting between 100 and 140 million women and girls globally.

The new measures follow warnings from the UK Border Force last month of FGM 'cutters' flying into the UK to perform the procedure and a raft of government initiatives to obstruct those who practise FGM in the UK or who subject children to genital mutilation overseas. Earlier measures announced included the collection of data on the prevalence of FGM for the first time and the use of specialist teams at airports under Operation Eris to monitor flights to high-risk nations and identify potential victims of FGM. The latest measures are explicitly focused on preventing girls being taken abroad for genital cutting, a trend which is particularly prevalent during school summer holidays.

Mike Penning MP described the amendment as an "unprecedented package of measures to strengthen protection for victims, encourage them to report the crime to the police and get support". The Minister added that "legislation alone cannot eradicate this unacceptable practice. But it is important that we change the law where necessary".

The new measures were announced on the same day that anti-FGM campaigner Efua Dorkenoo died. Jane Ellison MP, Parliamentary Under Secretary of State for Public Health, tweeted: "We have lost Efua Dorkenoo OBE, mother to a movement & beloved inspiration to so many of us. But generations of girls will bless her". Dorkenoo had recently helped launch "The Girl Generation: Together To End FGM", a campaign funded by the Department for International Development aimed at ending FGM in Africa in a single generation.