Prison imams found to have links with Islamic extremism 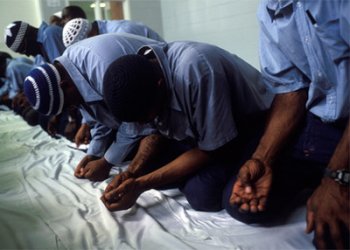 Some of the imams working in UK prisons as chaplains have links with Muslim extremist groups, and may be contributing to the radicalisation of inmates, The Times newspaper has revealed.

According to the Muslim advisor for the Prison Service, Ahtsham Ali, in 2009 there were 203 Muslim chaplains employed by the Prison service. A Ministry of Justice document states that of the total number of chaplains, 80 were employed full-time. Prison chaplains are funded by the state, and since 1952, by law, every prison has been obliged to have one.

There are just under 12,000 Muslim prisoners in Britain's jails, with around 100 of them considered al-Qaeda-inspired Islamist terrorists, according to The Times.

The government says that it deploys imams in order to help steer Muslim inmates away from extremist paths, but there have been suggestions that some of these imams are in fact part of the problem of spreading extremism rather than part of the solution.

According to The Times report, the Prison Officers' Association has said that there is a "real problem" with inmates being radicalised, with some imams with radical views having "slipped through the net".

The Times highlights three imam chaplains with extremist links. One is Shaykh Yusuf Az Zahaby, who, along with being a chaplain and mentor in West Bromwich, is a leading member of Al Hikma Media. Al Hikma media is a preacher-run group which has expressed extremist views and whose members include Abdur Raheem Green, who supports the beating of women to "bring them goodness" and Shady Suleiman, who has promoted the killing of women who have pre-marital sex.

Another is Azadul Hussain, who has mentored prisoners in Bedford. He has shared material on his Facebook page from MPAC, an anti-Semitic Islamic extremist group that advocates killing adulterers.

A third chaplain with extremist links highlighted is Sahib Bleher, who had been a part-time chaplain at Woodhill high-security prison in Milton Keynes for eight years. He was also the general secretary of the Islamic Party of Britain, a political party that allegedly advocated the death penalty for public displays of homosexuality and wanted to transform Britain into an Islamic state. Mr Bleher denies that he has ever had extreme views.

Professor Anthony Glees, head of the centre for security and intelligence studies at the University of Buckingham has called for better vetting procedures in the recruitment of chaplains.

He described UK prisons as "a state-funded breeding ground for extremism."

He has also said that it is necessary to "stop confusing 'preachers' with 'chaplains'" and that "their religious qualifications should be properly checked, they should be required to preach in English and told they must keep clear of all political issues."

Professor Glees argues, that "what these 'preachers' do is put extreme views to prisoners - for example gays should be hanged, the Jews/CIA carried out 9/11, adulteresses should be stoned to death. They foment resentments and when you add extremism to resentment you get radicalisation and ultimately terrorism. Not every radical is a terrorist but every terrorist has been a radical."

According to a spokesperson for Her Majesty's Prison Service, it is "committed to tackling extremism in prison and chaplains are a vital part of this work, helping to challenge dangerous and distorted views. Muslim chaplains are subject to rigorous security vetting and checks — as are all prison staff. Any member of staff giving cause for concern will be dealt with robustly."