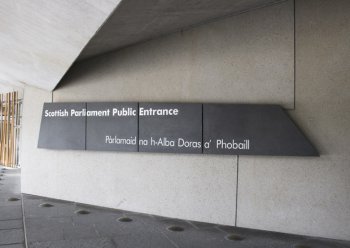 Secular campaigners in Scotland have lodged a formal complaint after the Scottish Parliament was used by an evangelical Christian group to launch a manifesto ahead of the Scottish independence referendum taking place in September.

Edinburgh Secular Society (ESS) claims official guidance was breached when Holyrood was used by Evangelical Alliance Scotland (EAS) to host a reception to mark the publication of its manifesto entitled What Kind of Nation?

Official guidelines say organisations "are not permitted to use the parliament complex for official launches of any kind". In its complaint to Scottish Parliamentary, the ESS say the event constitutes a "clear and extremely serious "breach of the rules.

ESS make clear in the complaint that it has no objections to the general voicing of religious opinion, but says it is concerned that the launch of EAS's manifesto was allowed to take place in the Scottish Parliament with an endorsement from a government minister.

A spokesperson for EAS told Edinburgh Evening News that the organisation was aware of the rules but denied there had been any breach. He said: "It was not a launch. We published the document earlier in the week. It was on our website.

"We talked this through with the parliament. We were particularly careful not to call it a launch. We cannot legislate for what other people might call it."

Norman Bonney, ESS honorary president, said: "It was a launch in all but name, and by allowing it to take place the Scottish Parliament have undermined basic democratic principles of impartiality, justice and equality".

Prof. Bonney said the incident was part of a worrying trend of favouritism to religious denominations by the Scottish Parliament and Scottish Government. He said:

"The Scottish Parliament grants disproportionate time to religious representatives in its weekly Time for Reflection and recently the Scottish Parliament and Scottish Government have refused to consider the legal obligations upon them resulting from the Equality Act that require a review of procedures which allow the Roman Catholic Church and the Church of Scotland to nominate voting members of Scottish Council education committees.

"The promotion of secularism in Scotland is an uphill struggle and has not been assisted even in those many areas where Scotland has had self-government since 1999. There is little evidence that things would change if Scotland votes 'yes' in September's independence referendum."