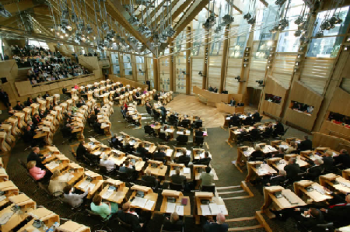 Campaigners in Scotland have called for the Scottish Parliament's weekly 'Time for Reflection' to be more representative of the diversity of religion and belief in Scotland.

Speakers leading Time for Reflection (TFR) are predominantly representatives of Scotland's different faith groups, but the slot is also open to those of no religious affiliation.

At a meeting of the Public Petitions Committee on 6 May, Edinburgh Secular Society (ESS) President Norman Bonney argued that TFR is dominated by religious voices and that the moral views of the non-religious half of the population are not heard by MSPs.

A motion approved by the Scottish Parliament in 1999 proposed that TFR would "follow a pattern based on the balance of beliefs in Scotland". However, according to Norman Bonney, contributions since then have heavily over-represented religious denominations. Although only 56% of Scots indicated in the 2011 census that they had a religion, Mr Bonney said respective contributions by religious denominations to TFR in the previous three parliamentary sessions from 1999 to 2011 were 98%, 87% and 86%.

Coincidentally, on the day of the Public Petitions Committee meeting, TFR was presented by ESS Board member and Humanist Society Education Officer, Gary McLelland, who delivered a "humanist parable on the dangers of segregated schooling". It was only the fourth Humanist contribution in fifteen years of about 450 sessions.

The National Secular Society has called for the complete removal of Time for Reflection from formal proceedings of the Scottish Parliament.

Alistair McBay, NSS spokesperson for Scotland, said: "Time for Reflection clearly fails in its intention to be representative of the range of faith and belief in contemporary Scotland, but one has to question why anyone should be given a privileged platform to lobby Parliament on the basis on them belonging to a particular religion or belief community."

Meanwhile, the Scottish Parliament's Education and Culture Committee has been giving consideration to an ESS petition to remove non-elected but voting religious nominees (mostly Church of Scotland and Roman Catholic representatives) from Scottish council education committees. The Equality and Human Rights Commission has suggested that these arrangements do not meet the requirements of the UK Equality Act of 2010 which requires public authorities not to discriminate on religious grounds.