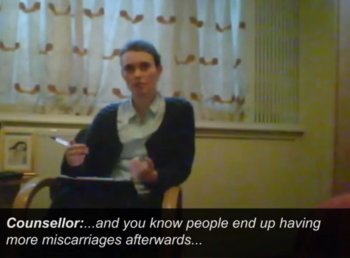 A recent report by Brook, an organisation that provides free and confidential sexual health advice and contraception to young people, has yet again revealed that CPCs, very often run by religious bodies, are providing misleading information on the mental and physical health outcomes of abortion and using inappropriate language and emotional manipulation when providing advice to women considering an abortion.

Of the five main CPCs, four are either outwardly religious or have religious roots. One, the Good Counsel Network (GCN), is a "Catholic, pro-life group based in London", that provides counselling to pregnant women "founded on prayer and the teachings of the Catholic Church"as well as hosting "abortuary vigils" outside abortion clinics. A counsellor at one of its Centres, the Central London Women's Centre (CLWC), told an under-cover reporter that after abortion there is "an increased statistical likelihood of child abuse" because women had to break "natural barriers that are around the child that you don't cross" in order to terminate a pregnancy. The counsellor also falsely claimed that women who had terminations were 25% less likely to be able to carry a pregnancy to full term.

Another group running CPCs, Image, is a Christian charity that is expressly anti-abortion. It organises a "National Day of Prayer about Abortion", and distributes a prayer guide, encouraging people to "pray that those who advocate arguments which rationalize away the killing of unborn children would come to understand that the sanctity of human life is paramount".

The third group, Foundation for Life, was founded by American pastor, Dr Joel R Beeke, who has compared abortion to the Holocaust.

The fourth group, an organisation responsible for providing the largest number of CPCs in the UK, is the CareConfidential. CareConfidential was founded by the charity Christian Action Research and Education (CARE), whose charitable aims, as listed with the Charity Commission, are: "The advancement and propagation of the Christian Gospel and in particular Christian teachings as it bears on or affects national and individual morality and ethics". CARE has a network of 162 Crisis Pregnancy Counselling Centres across the UK, most of which are attached to evangelical Christian churches.

Amongst some of the claims made by centres run by, or affiliated with, CARE was that there is such a thing as 'Post-Abortion Syndrome', a fabricated medical disorder which is unrecognised by any medical body. Counsellors also shared their religious beliefs, personal experiences or made value-judgements on abortion and adoption, as well as giving out booklets produced by the American anti-abortion organisation, Focus on the Family.

CPCs are supposed to offer counselling on pregnancy choices, and sometimes free testing and other services. Unlike the Government registered Pregnancy Advice Bureaux, CPCs are unregulated. And whilst they are independent of the NHS, a number of CPCs have established links with the NHS (Care Confidential is actually signposted to by the NHS Choices website) and some claim to be receiving referrals from local GPs and hospitals. According to Brook, at least four Care Confidential affiliated CPCs are located in GP practices or hospitals.

Following Brook's latest report, a number of MPs have asked the Government to look into abortion counselling services.

Stephen Dorrell, Conservative MP and chair of the Health Select Committee, told The Telegraph: "most people in this country will regard it as unacceptable for pregnant women to seek advice from somewhere, which says it offers advice, and receive people's prejudiced opinions instead". He has written a letter to Jeremy Hunt urging action.

Dr Sarah Wollaston MP, a member of the Health Select Committee, also called for Mr Hunt to review the abortion counselling services: "There has to be transparency about who is funding these organisations and whether they are anti-abortion". She noted: "If a 'clinic' is giving medical advice it should come under the remit of the Care Quality Commission which should then have the powers to close it if it is giving out completely false information".

Luciana Berger MP, Labour's shadow public health minister, commented, "in light of this emerging evidence on women receiving incorrect information, we must look again at the lack of regulation in this area".

The Royal College of Obstetricians and Gynaecologists (RCOG) has commented that it "believes that Clinical Commissioning Groups have a duty to ensure that pregnancy counselling services contracted follow national guidelines. It is important to ensure that impartial, non-judgemental advice is provided to women at this difficult time".

The NSS is also writing to Jeremy Hunt, asking that he investigate the regulatory issues surrounding CPCs, to ensure that women are given factual, impartial and value-free advice when using their services.