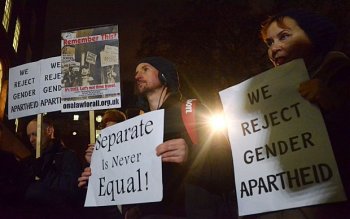 The United Nations rapporteur in the field of cultural rights, Farida Shaeed, has been approached by students and women's groups to investigate the issue of gender segregation at British Universities.

In an open letter, campaigners called for the British Government to ban segregation of all kinds – and hoped that the UN might be able to press it on the matter. The Prime Minister has already said that the practice of making men and women sit separately at public events in universities is totally unacceptable.

The letter was published on the London School of Economics' student union website this week and has been signed by an array of individuals representing students, women's rights groups and ex-Muslims.

Chris Moos, the secretary of LSE's Atheist, Secularist and Humanist Society, who was recently involved in the Jesus and Mo t-shirt debacle, also signed the letter. He told The Independent: "We hope that the UN will air their concern about the on-going issue of gender discrimination in public institutions in the UK, and advise the UK government on how to ensure full compliance with the existing human rights legislation that outlaws discrimination on the basis of protected characteristics like gender".

Pragna Patel, the director of Southall Black Sisters, told the paper: "Gender segregation, if allowed to gather momentum in higher education, will have enormous, disproportionate impact on black minority women. We see a direct link between the work we do and supporting students who are leading this struggle".

Universities UK and the Federation of Islamic Students Societies were both targets in the open letter.

The debate has been raging for some time and has been inflamed by incidents such as the one involving NSS honorary associate Professor Laurence Krauss, who threatened to leave a meeting at University College London where segregation was being enforced.

A march has also been planned which will take place on 8 March this year.