Nuns say they will contribute nothing to Magdalene Laundry survivors’ compensation 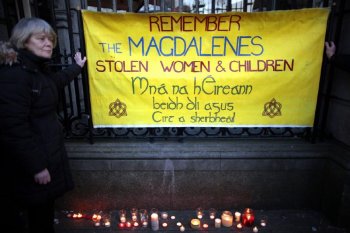 The four orders of nuns that ran the notorious Magdalene Laundries in Ireland have said they have no intention of contributing anything towards the compensation fund set up by the Irish Government.

The Mercy Sisters, the Sisters of Our Lady of Charity, the Sisters of Charity and the Good Shepherd Sisters told the Minister for Justice Alan Shatter that they will leave it to the taxpayer to pick up the bill and will pay nothing towards the compensation fund which could total €58 million.

They have said they will continue to look after elderly former residents who have not been able to find anywhere else to live — but that's all.

The Government announced the scheme last month after Mr Justice Quirke had inquired into the options available to compensate the women who had been incarcerated in the laundries and used as forced labour.

The minimum payment was €11,500 for women who spent three months or less in a laundry and the maximum approved was €100,000 for those who were residents for 10 years or more.

It is estimated that about 600 women will be eligible for compensation and they will not have to prove that they were abused or suffered hardship.

Mr Shatter said he had expected the four orders of nuns that had run the laundries on behalf of the state to contribute to the compensation, but didn't specify what he expected them to pay.

The scheme comes after years of campaigning by the survivors of the Magdalene Laundry system. The Irish Premier Enda Kenny gave an emotional apology to the victims in the parliament earlier this year, saying nobody should have had to endure the cruelty and degradation that the women in these institutions did.

The apology and compensation scheme was prompted by an investigation by former senator Martin McAleese into the Laundries, which operated for nearly a hundred years. The report condemned the state's role in allowing the Magdalene Laundries to continue and the religious orders for their cruelty and oppression of the women who were admitted.

Chief Executive of Barnardos, Fergus Finlay, told the Irish Examiner that the Government should call the religious orders to account. "I think these religious orders have to be called in — if necessary, publicly — and they have to be told that the government and the people of Ireland expect them to make a contribution."

Keith Porteous Wood, executive director of the National Secular Society commented: "We hope that campaigners will remind the Irish Government that the 18 orders involved in the Magdalene Laundries made €667m in property deals between 1999 and 2009."

Recent Vatican announcements have been keen to stress the Pope's solidarity with the poor and marginalised.

See also: The Church owes the women of the Magdalene Laundries