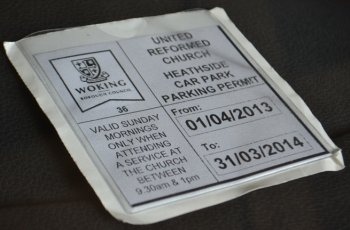 A legal challenge has been launched against Woking Borough Council's policy of offering free parking to worshippers while charging everyone else.

The challenge has been issued by National Secular Society lawyers in response to complaints from residents in Woking borough. The NSS alleges that allowing free parking for worshippers – which costs local tax-payers over £50,000 per year – constitutes direct discrimination on the grounds of religion and belief contravenes the Equality Act.

Woking has sought to justify its preferential treatment of worshippers in a policy statement which stated: "Places of worship, and the faith communities that they serve, play an important role, both in society in general and Woking in particular. They encourage people to participate in society, thereby promoting social inclusion."

However, an Equality Impact Assessment commissioned by the Council in response to a previous complaint from the NSS, urged the Council to also consider that secular activities also promote social inclusion and are as important as religious observance to building and maintaining the social as well as the economic fabric of communities.

One local resident, Aidan Griffin, said: "As someone who doesn't attend church, I should not be treated any less favourably than anyone else parking their car in Woking town centre on a Sunday morning. As a taxpayer I'm also concerned about the loss of revenue to the Council arising from this policy".

Keith Porteous Wood, executive director of the National Secular Society said: "The equal treatment of all, regardless of belief or non-belief, is a key secular principle. We have launched this challenge to preferential treatment of worshippers because it is neither legitimate nor lawful for local government to subsidise the activities of any particular religion and belief group.

"It would be fairer if the Council either charged worshippers for parking, as they do everyone else, or provided free parking for all."