Does the closure of leading “gay-cure” ministry signal a change of direction for America’s Religious Right? 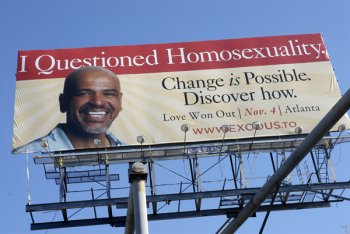 Exodus International, one of the oldest "gay-cure" ministries in America, is closing down after admitting that it has hurt and damaged thousands of homosexuals- even driven some to suicide - with its misguided claims that it could turn gay people straight.

The announcement was made during a religious conference after Exodus' President Alan Chambers apologized to members of the gay community for "years of undue judgment by the organization and the Christian Church as a whole," the Florida-based ministry said in a statement.

"I am sorry I didn't stand up to people publicly 'on my side' who called you names... I am sorry I have communicated that you and your families are less than me and mine," Chambers said in his apology.

"More than anything, I am sorry that so many have interpreted this religious rejection by Christians as God's rejection. I am profoundly sorry that many have walked away from their faith and that some have chosen to end their lives."

Chambers said in a statement that the organisation's directors voted to shut down Exodus and start a new ministry that would work with other churches to create "safe, welcoming and mutually transforming communities."

Chambers, who has been director of the organisation for 11 years, says that he thought long and hard before coming to the conclusion that Exodus was not "a wonderful organisation" and that it had caused trauma to countless innocent people.

Terry Sanderson, President of the National Secular Society, said: "This is good news, although I doubt we have seen the end of the 'ex-gay' fantasy among the wilder shores of Christianity. Mr Chambers may have had an epiphany, but many of his evangelical colleagues are already calling him a traitor and a heretic.

"The idea that a 'final solution' can be found for homosexuality by praying it out of existence will persist. It will be interesting to see what the promised 're-configuration' of Exodus amounts to. If the change is just cosmetic, the fight against it will continue – even intensify."

Mr Sanderson said that the Religious Right in theUSAwas pragmatic and had recognised that it was losing public esteem by its obsessive hatemongering against gay people and their rights.

"During the last presidential election, the evangelicals put all their eggs into the opposition-to-gay-marriage-basket, thinking they could use homosexuality to unseat Barack Obama. They got it completely wrong and now their survival instincts have kicked in. The Exodus volte face may be a sign that the Religious Right in theUSAhas recognised that trying to use prejudice against gay people as a political tool weakens rather than strengthens them. I think we are going to see more stepping back from hateful attacks as the focus changes to something else, probably abortion."

Meanwhile, a new report from the Pew Research Centre shows that the aggression of the religious right has driven more and more gay people out of the churches and turned them into atheists. The report shows that American lesbian, gay, bisexual and transgender adults are far more likely to identify as atheists than the general public.

The report, part of Pew's recently released "Survey of LGBT Americans" shows that almost half of LGBT Americans describe themselves as atheist, agnostic or having no religious affiliation, compared to only about 20% of the general population. Among LGBT adults who do have a religious affiliation, 33% say they feel a conflict between their religious beliefs and their sexual orientation or gender identity. At the same time -- and perhaps not surprisingly -- LGBT Americans also report feeling unwelcomed by religious institutions, which may account for some of the decreased religiosity within the community.

"Many LBGT adults see major religious institutions as unfriendly toward them," the study's authors wrote. "About three-in-ten LGBT adults (29%) say they personally have been made to feel unwelcome in a church or religious organization."

See also: Religion and sexuality shouldn't compete against each other

Terry Sanderson on the Religious Right's baneful attempts to desecularize the United States with a raft of "religious freedom" bills.

There seems to be something of a disconnect in America between the rising...

Is the Religious Right responsible for America’s fading allegiance to religion?