Sexual segregation at a UCL event a scandal, say students 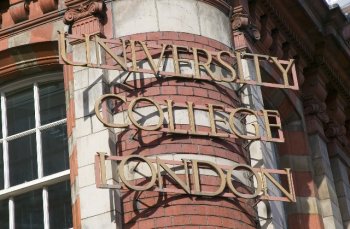 University College London has launched an investigation after an Islamic group hosted a debate on its premises with seating segregated by gender.

The following statement, reproduced in full, has been released by concerned students:

A policy of sexual segregation was enforced at an event at University College London on Saturday, with the organisers' security trying to physically remove members of the audience who would not comply.

Seating at the event was segregated between men and women, with a small 'mixed' space allocated for couples.

Separate entrances were in place for women and men, although 'couples' were allowed to enter via the men's door. Male attendees were refused entry via the women's door.

The event "Islam vs Atheism" on Saturday 9th was organised by the Islamic Education and Research Academy (IERA), and pitted writer Hamza Tzortzis against Professor Laurence Krauss in a debate.

A policy of segregation was suggested by IERA in a statement before the event, which said: "As for seating, it is according to when the ticket was booked and gender." This was raised by students with UCL, who gave assurances that no segregation would be allowed.

Fiona McClement, UCL equalities and diversities adviser, said on 8th March: "We have been in contact with the event organisers and made it clear that UCL will not permit enforced gender segregated seating. All attendees are free to sit wherever they feel comfortable."

Sarah Guise, head of equalities and diversity, deans of students Mike Ewing (academic) and Ruth Siddall (welfare), as well as UCL gender champions Professor Mary Collins and Baroness Diana Warwick of Undercliffe, were also informed of the plans of the organisers to breach UCL's Equality and Diversity policy.

Ms McClement and Rob de Bruin, co-chair of the 50:50 Gender Equality Group, said: "The UCL security team will be in attendance to ensure compliance with this. If the event organisers do not comply, the event will not be permitted to go ahead."

Despite these assurances, segregation was enforced on the night.

At the entrance to the UCL building audience members were separated into male and female only queues by the organisers' security staff.

The policy of segregation was strictly enforced inside the building. Male attendees were refused entry via the women's door to the lecture theatre. When asked if the event was segregated, one of the security staff said: "It's slightly segregated." Dr Aisha Rahman said she was an organiser and that the room had been booked on behalf of UCL Chemistry. She said the segregation had been agreed with the University and suggested more than once that the men should be refused entry.

Several attendees approached UCL's security personnel to alert them to the situation, but found that the staff were unwilling to intervene, and were instructed to comply with the organisers' policy of segregation.

After more discussion, three male attendees were told they would be permitted to sit in the women's section, but were directed to an isolated space on the side of the lecture theatre, away from everyone else.

One of the students, Christopher Roche, said: "It was clear that the segregation was still in effect as when I sat in the same aisle as female attendees I was immediately instructed by security to exit the theatre. I was taken to a small room with IERA security staff and an organiser named Mohammad who told me that the policy was actually given to IERA by UCL.

"Shocked, I said that I would like to return to my seat but was told that security would now remove me from the premises for refusing to comply with the gender segregation."

The organisers' security staff then tried to physically remove Mr Roche and Adam Barnett, a journalism student and friend of Mr Roche, from the theatre.

Professor Krauss intervened and threatened to leave to stop the removal of the two audience members. The organisers then prepared a row near the women's section at the back of the room where the two men sat quietly for the event. Professor Kraus said he had been told in advance that there would be no segregation, and that people could sit wherever they wanted.

Adam Barnett said: "What happened on Saturday is a scandal. UCL and the organisers owe an apology to me, my friend, the audience and the general public. For a London University to allow forced segregation by sex in 2013 is disgraceful.

"The organisers should also apologise for their appalling behaviour if they want to hold any more events on campuses in the future."

He added: "It's insulting to be told that because I'm a man I can't sit near women in the audience. I'm not in the habit of forcing my presence where it's unwanted, but the event's organisers have no business policing social matters of this kind. Furthermore, the women in question were never asked whether they cared where we sat."

"In this case the segregation was non-voluntary. But voluntary or not, segregation is wrong, as well as a violation of UCL policy."

Another student attendee, Halima, said "What happened at UCL was utterly disgraceful. I found the atmosphere intimidating and divisive, and I regret not joining my male friends in openly opposing this violation of gender equality in public premises. However, I was genuinely fearful of the repercussions.

"As an Asian woman I found the enforcement of non-voluntary segregated seating incredibly offensive and especially outraged to see females were allocated seats at the back corner of the auditorium to view the debate from a disadvantaged position. Segregation based on gender difference is totally unacceptable under any circumstances and UCL's failure to protect equal rights is a heavy stain on their reputation."

Chris Moos, a PhD student who sought assurances from UCL before the debate, said: "Having personally attended this event, I cannot tell you how disappointed I and many other attendees are that UCL did not live up to its promise to make sure that its Equality and Diversity policy was enforced.

"Overall, the atmosphere of the event was intimidating for both male and female students, who were shocked to see that although concerns about the plans to enforce gender segregation had been raised before with UCL, the organisers were able to violate its policy and create a threatening and divisive atmosphere that was not inclusive to all attendees."