Putin’s privileging of the Orthodox Church in Russia may go too far, even for the patriarch 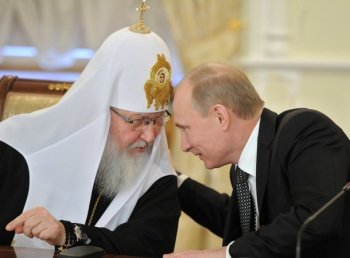 Russian President Vladimir Putin has signed a new bill into law that makes religious education mandatory for all schools in the country.

The legislation concerns a course on the fundamentals of religion that will be taught at all schools, the Moscow Times reported, although it did not specify which religions will be discussed in classrooms. The law was approved by the Federation Council on 26 December 2012, and will go into effect on 1 Sept 2013.

Putin, an Orthodox Christian, has been privileging the Russian Orthodox Church, the dominant religion in the country. The Church's leading bishop, Kirill I of Moscow, has often acted as adviser to the president, although that has also sparked some dissatisfaction among Russians who insist that church and state should remain separate.

The proposals have even alarmed Bishop Kirill who welcomed the jailing of Pussy Riot, and he has asked the Kremlin not to go too far.

In remarks published on the eve of Russian Orthodox Christmas, Kirill, who has likened Putin's long rule to a "miracle of God", told the Interfax news agency that Russia needed stiffer punishments for offences against religion.

"A fine of several hundred roubles (about $10) for blasphemous inscriptions on a church, a mosque or a synagogue signals that society does not fully realize the importance of protecting ... religious feelings of believers," he said.

But in his most extensive comment on the proposed law, he said it should not limit citizens' rights.

"Any regulatory acts regarding the protection of religious symbols and the feelings of believers should be scrupulously worked through so that they are not used for improvised limitation of freedom of speech and creative self-expression."

The remarks were in line with indications that Putin, while wanting to make clear that actions such as the Pussy Riot protest are unacceptable, is wary of undermining the balance between religions in the diverse country.