German poll indicates a widespread fear of Muslims and Islam 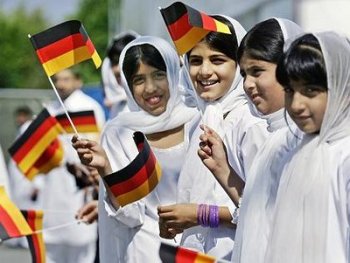 The German newspaper Frankfurter Allgemeine Zeitung has commissioned an opinion poll to find out what Germans think about Muslims. Generally, the results are regarded as "catastrophic".

Respondents to the poll were asked to choose which of 21 statements they were offered about Islam that most closely reflected their opinion. 83% of them think that Islam is associated with impairing women's rights, 77% thought Islam was a literalist religion; 70% said Islam is associated with religious fanaticism and radicalism. A significant part of Germany's population also believes that Islam is ready for violence (64%), hatred (60%), active missionary activity (56%), and striving for political influence (56%). Only 13% of respondents associate Islam with love for neighbours; 12% - with charity; 7% - with openness and tolerance.

These results do not differ much from a similar poll conducted in May 2006, although that poll was taken at the height of the Mohammed cartoons controversy.

The high level of mistrust in Islam is reflected in other questions. For example, in 2006, 55% of respondents answered yes to the question "Do you think that serious conflicts will appear between the Western Christian culture and the Arab Muslim culture in the future?" Today there are 44% people who think so. In 2006 and today a quarter of respondents believe that such serious conflicts exist even now.

Another question concerned the term "a clash of civilizations". In 2006 46% of Germans were sure that such a clash was taking place; in 2010 this number grew to 58%; it has now reduced to 43%. However, these people still represent a simple majority, as only 34% responded negatively to the question.

36% of German respondents think that Christianity and Islam can live peacefully together. However, 53% think that serious conflicts between these two religions will develop.

At the same time, Germany's population doesn't think that all Muslims are aggressive. One of the questions was "There are different views on whether Islam is a threat or not. What do you think: is Islam a threat in general or the threat comes from certain radical groups?" 74% of Germans think that the threat comes from certain radical groups, rather than from Islam in general. Only 19% of respondents believe Islam is a threat.

As for relations between Muslims and non-Muslims in Germany, respondents have pessimistic attitudes. 48% respondents answered positively to the question "Do you think tension in relations with Muslims will grow in Germany in the nearest future and should we be afraid of it?" Only 29% of people see no threat.

The majority of Germans don't support policies of accommodating demands for censorship or special privilege. Only 27% of respondents think that for protecting peace there should be a ban on anything that might insult or provoke Muslims. 52% argued against this.

In response to the statement "Even though it is a personal choice, I don't like to see a woman wearing a scarf on her head," 47% and 34% disagreed.

When asked if they agreed with the statement "Islam and Christianity are equally German" only 22% of respondents agreed, while 64% answered negatively. At the same time, 47% of people do not see Muslims as a part of Germany.

However, there is hope of change. In 2004 only 24% of Germans had Muslim friends; today 38% of Germans have friends among Muslim people. Germany has the largest Muslim community in Europe, followed by France and the UK.