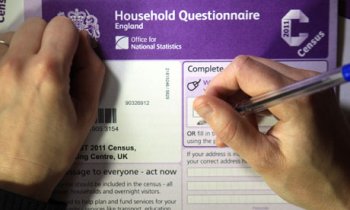 The census figures also reveal that Muslims are the second largest religious group in the country at 4.8%. The third most popular religion was Hinduism, with 1.5 per cent of the population, while 0.8 per cent were Sikhs and 0.5 per cent Jewish.

Responding to the findings, NSS president Terry Sanderson said: "Such an enormous reversal in the space of ten years is an indication of the huge upheaval there has been in religious attitudes in Britain.

"It should serve as a warning to the churches that their increasingly conservative attitudes are not playing well with the public at large. It also calls into question the continued establishment of the Church of England whose claims to speak for the whole nation are now very hard to take seriously."

Mr Sanderson said he was surprised at the size of the drop. "It will certainly give the churches a great deal of food for thought, and should tell the Government that although it might 'do God' as Baroness Warsi claims, a huge proportion of the population do not. This should be reflected in policy-making."

The census backs up other polling data that reveals a similar cultural shift. The 2012 British Social Attitudes Survey (BSA) showed that only about half of Britons as a whole now say they have a religious affiliation, sharply down from 20 years ago when it was two-thirds. Barely a quarter of young people now identify themselves as religious.

In Wales, 32% of people said they had 'no religion' – a higher proportion than any English region. The proportion of people in Wales who said they were 'Christians' has decreased by 14% since 2001.