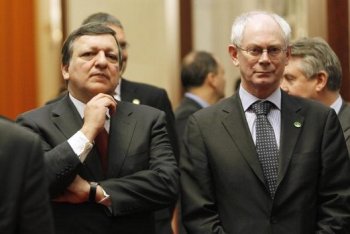 The Presidents of the European Council and European Commission today heard a plea for greater protection for pregnant women's right to life following the death of Savita Halappanavar in Ireland. Mrs Halappanavar died in October after suffering a miscarriage after reportedly being denied a termination.

In his intervention, Keith Porteous Wood, executive director of the National Secular Society, told representatives of the European Union that both the woman's death and Ireland's denial of women's human rights were a scandal. Mr Wood called on the EU Presidents to apply pressure on Ireland to change this law which appears to breach "the right to life" enshrined in Article 2 of the EU Charter of Fundamental Rights.

He said he was also seeking more help from the EU to protect the human rights of all citizens who are denied them by the application of religious dogma in the provision of public services.

The theme of the meeting was 'Intergenerational Solidarity: Setting the parameters for Tomorrow's Society in Europe'. The meeting was also attended by NSS vice president Elizabeth O'Casey.

Mr Wood pointed out that policies made by national and EU bodies almost always reflect the perspectives of politicians and advisers, rather than those of the young – which are often markedly different. He said every EU institution needs to try harder to capture the hearts and minds of the young in order to arrest their growing alienation from politics.

He said: "One of the most striking features of the difference in attitudes between the older and the younger in much of Europe is in their attitude to religion — and arguably even more importantly — to sensitive social issues. On these, younger citizens tend to be very much more liberal than their elders."

Read the speech in full (PDF)