Swiss drifting away from religion 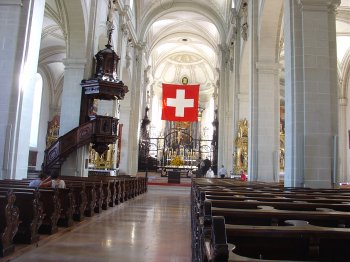 A large-scale study of Swiss attitudes to religion has been carried out by the University of Lausanne. They discovered the same trends of secularisation occurring in Switzerland as in the rest of Europe.

The mainstream churches in Switzerland are dwindling, society is becoming increasingly secularised and there is a growing polarisation between conservative and liberals on the religious spectrum.

Interestingly, the secularisation process is also happening among young Muslims.

The two main churches, Roman Catholic and Protestant, are both haemorrhaging membership and even those who remain in the fold feel "distanced" from the church and retain only a superficial attachment.

The phenomenon of keeping religion at arms' length was studied by sociologist Jörg Stolz of Lausanne University.

"More than 60 per cent of the population can be counted in that distanced group. It's a group who say 'I am Catholic but …' or 'I am Protestant but …'. There is always a 'but', they will say 'I'm not practising' or 'it's not the most important thing in my life'," he told swissinfo.ch.

"This group also distances itself from a complete atheism," Stolz said. They believe in a higher power but have not made up their minds what form it takes. It's a large group, not just in Switzerland but in most other Western countries," he added.

Despite their reluctance to conform on matters of faith and in practising their religion, these "distanced" Christians still think the church is valuable socially and do not support its separation from the state. (A church tax is applicable in Switzerland).

Meanwhile, the proportion of institutional believers, people who actually believe in the churches' teachings and turn up regularly for church services, is dwindling. They now stand at 15 per cent of Protestants and 23 per cent of Catholics. It is worth noting that the ranks of faithful Catholics are being swelled by immigrants.

The trend of people leaving the main churches is very likely to continue, according to Stolz. The reasons they give are indifference to the church's activities and anger at the reactionary nature of the church under the present pope. Another reason is to avoid paying the church tax, but this is one that people are less inclined to admit to – there is a residual guilt in leaving the church because of money.

According to the research, most people think that religion should be consigned to the private sphere and that "extremist" tendencies and proselytising should not be accepted.

The researchers see the potential for future conflict between very religious and very secular people.

However Stolz sees no risk of Islamisation in Switzerland. "People often have the idea that there is a bloc that might grow immensely and create an Islamisation but nothing could be further from the truth."

The research also identifies a secularisation trend within younger generations of Muslims and a desire among leaders of the diverse communities to integrate into Swiss society.