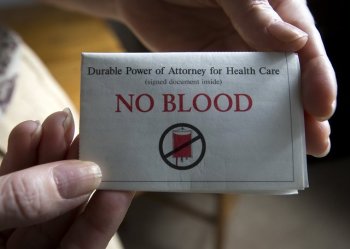 New research in the USA shows that Jehovah's Witnesses who refuse blood transfusions recover from heart surgery faster and with fewer complications than those who have transfusions.

Patients who are Jehovah's Witnesses had better survival rates, shorter hospital stays, fewer additional operations for bleeding and spent fewer days in the intensive care unit than those who received blood trans­fusions during surgery, a study in the Archives of Internal Medicine shows.

Jehovah's Witnesses undergo extensive blood conservation before surgery, including red blood-cell boosting erythropoietin drugs, iron and B-complex vitamins to guard against anaemia. The practice offered a "unique natural experiment" for scientists to study the short and long-term effects of the blood management strategy and may point to ways to reduce need for transfusions, researchers said.

The authors wanted to look at the difference between patients who receive blood transfusions during surgery and Jehovah's Witness patients, who undergo strict blood conservation practices before, during and after surgery, Koch said.

While many patients do not have blood transfusions during and after heart surgery, they also do not undergo the same blood conservation practices that doctors use for Jehovah's Witness patients.