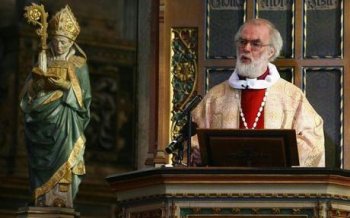 A poll of more than 2,000 people conducted by YouGov for the Stonewall gay rights group has revealed that three in five people who define themselves as religious support government plans to extend civil marriage to same-sex couples, despite an hysterical campaign against the proposal by some religious leaders.

Stonewall's five-yearly polling of public attitudes, for its 2012 Living Together report (PDF), shows that more than 80 per cent of British adults under 50 now support the proposal.

Stonewall Chief Executive Ben Summerskill said: 'Recently we've heard senior clerics distressingly compare marriage for gay people to polygamy, bestiality and child abuse. This polling holes below the waterline the suggestion that they speak for the majority of Britain's faith communities and vindicates years of campaigning by Stonewall to change public attitudes.'

The poll comes on the day that the Church of England has released its response to the Government's consultation on proposals for same-sex marriage. The response was condemned by the National Secular Society as "overstated and manipulative."

NSS Executive Director, Keith Porteous Wood, said: "The bishops have massively overstated their case to the point of, foolishly, challenging Parliament's authority to legislate over civil marriage. If, having recklessly ramped up the stakes so highly – even to include the future of Establishment - the Church loses, it will irreparably damage its authority.

"Its case could not be based on shakier grounds. It is shameless scaremongering to suggest that any religious body would be forced by the European Court to conduct same sex marriages – Article 9 (freedom of religion) of the European Convention of Human Rights would protect them from this. The Austrian Schalk case on which the Church relies was about civil marriage."

Mr Wood added: "The Church should be welcoming the introduction of civil same sex marriage because it reduces to zero the chances of it being forced to be involved in their solemnisation."

Terry Sanderson, President of the NSS, said: "This response, with its implication that the Government's plans represent the greatest threat to the Establishment of the Church of England since the Spanish Armada, are simply ridiculous. The bishops say that the Government 'doesn't have the right' to change the definition of marriage. But it has been changed many times over the centuries, particularly in relation to divorce. Indeed, in Biblical times it was common for men to have multiple wives. King Solomon is said to have had 700 of them."

He pointed to a report on the Ekklesia website which stated:

"Marriage has meant many different things in many different cultures. Very few British Christians would now argue for arranged marriage, let alone forced marriage or marriage while still of childhood age. Yet all these practices have been normal for Christians in certain times and places. When the Married Women's Property Act was passed in 1882, critics claimed that it was an attack on the sanctity of marriage. Similar claims were made when laws were introduced to protect women from domestic violence and rape (indeed, Stephen Green of the right-wing fundamentalist group Christian Voice still claims that marriage has been undermined by the law that bans men from raping their wives). As a friend of mine put it more bluntly recently, "The fact that you can't sell your daughter for three goats and a cow suggests that we have already redefined marriage".

Terry Sanderson said the idea that opening up civil marriage to same-sex couples would lead to the disestablishment of the Church of England was another piece of blackmail. "We would not complain if that turned out to be the case. Do we really want a state church that excludes and discriminates against a whole section of the community?"

Mr Sanderson also challenged the Church's claim that it supported civil partnership when they were voted on in the House of Lords in 2004 branding it "an outright lie". In its response to the Government the CofE states:

In addition it is not clear what additional new rights, opportunities or responsibilities if any the introduction of same-sex marriage would achieve given that the legal inequalities between heterosexual married couples and same-sex partners have already been addressed through the introduction of civil partnerships –which was supported by the majority of our bishops who voted on the legislation in 2004 when it was before the House of Lords. (our emphasis)

"In fact," said Terry Sanderson, "the bishops voted six to one against the civil partnership amendment and used exactly the same kind of apocalyptic rhetoric to oppose it as they are doing now with marriage."

Denmark legalised gay marriage earlier this year. Introducing the legislation, Danish Prime Minister Helle Thorning-Schmidt said same-sex couples could be married either at the Town Hall or in the Church of Denmark if the priest was willing.

"It will be up to each priest whether he or she will perform gay marriages, but the government gives all members of the church the right to get married in church, whether they want to marry a person of the opposite or same sex," Thorning said.

Although some church leaders have opposed same-sex marriage, surveys have suggested as many as 70 per cent of Danish priests would be happy to officiate at a gay wedding. The Government later announced that churches other than the state church would not be required to carry out the ceremonies if they chose not to.

Terry Sanderson: "Denmark has achieved with the minimum fuss a much better version of what Mr Cameron is trying to achieve. There were some objections from the reactionary elements in the church, but generally Denmarkis relaxed about it, and Denmark's national church is not making the idiotic fuss that ours is."