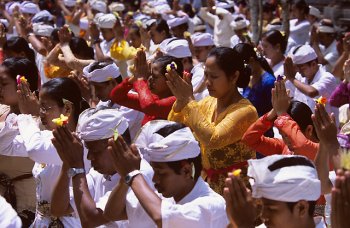 Belief in God is declining gradually worldwide, with faith highest among older people, a report released by the University of Chicago on Wednesday found.

The report, "Belief About God Across Time and Countries", found 13 percent of people living in the formerEast Germany expressed belief in God, while at the high end 94 percent of Filipinos say they have always been believers. The report said researchers found belief in God is higher among older people regardless of where they live.

"Belief in God has decreased in most countries, but the declines are quite modest especially when calculated on a per annum basis," said Tom W. Smith, director of the General Social Survey of the social science research organization NORC at theUniversityofChicago.

The data came from 30 countries in which surveys about belief in God have been taken at least twice since 1991.

The study found atheism is strongest in northwest European countries and the former Soviet states, with the exception ofPoland. Belief was found to be increasing inRussia,SloveniaandIsrael.

"Countries with low atheism and high strong belief tend to be Catholic societies, especially in the developing world, plus the United States, Israel, and Orthodox Cyprus," the study continued. "In the case of Poland, it appears that its strong Catholicism trumps the secularizing influence of Socialism."

In the United States, 81 percent of those surveyed said they have always believed in God. The report said 54 percent of Americans younger than 28 said they were certain of God's existence, compared with 66 percent of the people 68 and older.

"Looking at differences among age groups, the largest increases in belief in God most often occur among those 58 years of age and older," Smith said.

Smith concluded that "This suggests that belief in God is especially likely to increase among the oldest groups, perhaps in response to the increasing anticipation of mortality."

Keith Porteous Wood, executive director of the National Secular Society, doubted the claim that people found religion as they aged. He commented: "While no doubt a few people become more religious as they come closer to contemplating death, the overwhelming driver of these statistics is that the older people were born into a much more religious society than we have today.