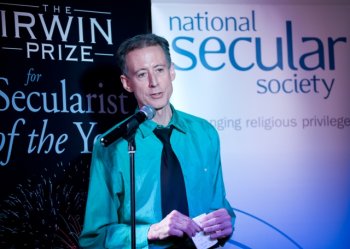 Human Rights campaigner Peter Tatchell was the winner of this year's award for Secularist of the Year. He was presented with the £5,000 Irwin Prize by the author and freedom of expression campaigner Nick Cohen at a highly enjoyable lunch-time event hosted by the National Secular Society last Saturday. The audience included prominent scientists, journalists, campaigners and writers including Richard Dawkins, Lord Taverne, Joan Smith, Oliver Kamm, Professor Peter Atkins and Maryam Namazie.

Terry Sanderson, president of the National Secular Society, said: "We are very pleased to be able to reward Peter's lifelong commitment to human rights and to honour his support for a just and inclusive secular society. He has been active in many progressive campaigns over the past forty or more years, not least in gay rights, and has had to endure much public and press abuse because of it. But he has persevered and now he has made the unprecedented transition from public enemy number one to national treasure."

Mr Sanderson said in his introduction to the presentation:

"I'm very pleased to see that at last he has been recognised as a true secularist and someone who has given much to the cause.

"Of course, you'd have had to live on the moon not to have been aware of Peter's many campaigns to drive forward human rights. He is an international player and perhaps his most famous confrontation was that with Robert Mugabe, the tyrant of Zimbabwe. This resulted in him being badly beaten by Mugabe's thug-like minders.

"He has also faced physical attacks in Russia and regularly finds himself the subject of attack in the streets and on public transport. His home is a fortress, but his determination remains resolute.

"The NSS first came across Peter when, in 1998, he audaciously climbed into the pulpit at Canterbury Cathedral and interrupted the Archbishop mid-flow. He wanted to call him to account for his antipathy to gay rights, something the Archbishop had consistently refused to address.

"Peter was charged under an obscure piece of legislation: the Ecclesiastical Courts Jurisdiction Act 1860. It uniquely protects churches from "riotous, violent, or indecent behaviour" and prosecutes anyone who "shall molest, let, disturb, vex, or trouble" a priest. The reverse, of course, doesn't necessarily apply. For all those who have been molested, let, disturbed or troubled by a priest, there's little redress – particularly given that the worst offenders are secreted away by the Pope in the Vatican, beyond the reach of those troublesome international arrest warrants.

"It is a law that uniquely protects churches and chapels – in other words a religious privilege – and it was at that point that we took up his cause. A conviction could have resulted in a substantial prison sentence.

"The magistrate could not avoid finding Peter guilty but showed his contempt of the law under which Peter was convicted by fining him a derisory £18.60, the year the Act was passed expressed in pounds and pence."

"I feel very privileged and honoured to receive the Irwin Prize. However, compared to the heroism of secularists and humanists living under religious fundamentalist regimes, such as Iran and Saudi Arabia, my own efforts are quite insignificant. I salute their courageous, inspiring work in defence of rationalism, scientific knowledge, freedom of expression and human rights.

"I pay tribute to my humanist and secularist colleagues in many countries, including Leo Igwe in Nigeria, Kato Mukasa in Uganda and George Thindwa in Malawi.

"Worldwide, organised religion is the single greatest threat to human rights; especially to the rights of women, LGBT people, atheists and minority faiths. Religious-inspired dogmas persecute Christians in Pakistan, Sunni Muslims in Iran, Shia Muslims in Bahrain and Jewish people in much of the Middle East. In many countries, atheists and apostates face discrimination, harassment, threats and violence from religious zealots. Some Islamist countries have the death penalty for Muslims who turn away from their faith. Even in the West, the religious right menaces freedom of expression and equality, with its demands for the censorship of the satire that targets religion and with its campaigns in defence of gender and sexual orientation discrimination.

"Secularists support the separation of religion and the state. With no established state religion, there is equality for people of all faiths and none. Secularism is the best guarantor of religious freedom. It is in the interest of people of all faiths, as well as the interests of non-believers. People are entitled to their faith but they are not entitled to insist that their religious values are the law of the land."

Clive Bone, the councillor at the centre of the council prayer victory in the High Court was awarded the £1,000 Simon Biber Memorial prize for special achievement, which was sponsored by Stephanie Biber.

Several other people were also thanked during the proceedings. First, Dr Ronan McCrea who is a Lecturer at UCL's Faculty of Law and an international expert on discrimination law. The NSS especially wanted to thank him for his extensive work on our intervention to the European Court of Human Rights on a case brought by four employees who had lost their cases in UK courts. Two involved anti-gay discrimination and two were about the wearing of crosses in the workplace. The NSS was the only organisation given leave by the Court to intervene and make the point that the courts were right and all these cases were correctly dismissed.

Then there was Neil Dewar, a student at Oxford, who has added another trophy recently to his illustrious list of debating triumphs. He wound up for our side so brilliantly at a recent debate at the Oxford Union where we comfortably prevailed over the opposition to win the motion 'This House Believes That the Dividing Line between Politics and Religion should Shine Brightly'.

NSS member Peter Fisher may well have saved our bacon during the High Court hearing over prayers in council meetings when the judge asked for evidence that they were still continuing. Our lawyers had not come prepared for that question, but Peter, who was sitting in the public gallery, happened to have a copy of the council's latest agenda, the only person who had.

Keith Porteous Wood commented: "This was a stunningly good afternoon – full of fun, laughter and heroics. The combination of an excellent meal and some superb speeches left everyone very happy with the occasion."

Magic was provided by Neil Edwards, aka Mr Trickman, who is available for close-up magic at parties and events. He comes highly recommended, having bamboozled some of the sharpest brains in the country.

You can read Nick Cohen's account of the event and listen to the presentations and speeches recorded by the award-winning Pod Delusion.

Previous winners of Secularist of the Year are: