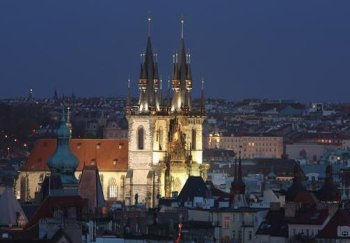 The Czech government approved a plan on Wednesday to return property confiscated from churches during the 1948-1989 communist era, a deputy prime minister said, overcoming a dispute that had threatened to topple the cabinet.

If the party carried out a threat to block the return of property and compensation payments to churches, Prime Minister Petr Necas had threatened to kick ministers from the junior ruling Public Affairs out of the cabinet and possibly bring down his government.

But Public Affairs deputy chairwoman Karolina Peake told journalists that the party had withdrawn its opposition and the government had passed the proposal.

"Due to the ultimatum we received, we were trying to find the most responsible way out of this... absolutely, nonsensically critical situation," Peake, who is also a deputy prime minister, told journalists in a text message.

Necas's centre-right government has impressed investors with its steps to narrow the budget deficit and plans to overhaul the pension, health and welfare systems. A collapse over the church property row would have been a negative sign for markets.

Under a plan agreed by the ruling parties and 17 religious groups led by the Catholic church, the government intends to give back most assets confiscated under communism, plus about 59 billion crowns ($2.91 billion) split into 30 annual payments.

Public Affairs had mainly objected to the plan because they said that with Czech economic growth expected to grind to a halt in 2012 after contracting in the third quarter by 0.1 percent, the government should wait for a recovery.

The return of church property has been planned since the bloodless 1989 "Velvet Revolution", but it has never won enough political support in the largely atheist country. The leftist opposition strongly opposes the measure, also citing severe economic headwinds.

Since the cabinet took power in mid-2010, it has been beset by a string of internal rows caused by corruption scandals, personality clashes, and the demands of individual parties.It has only survived due to a lack of alternative government alliances and the ruling parties' fear that an early election would hand power to the opposition.