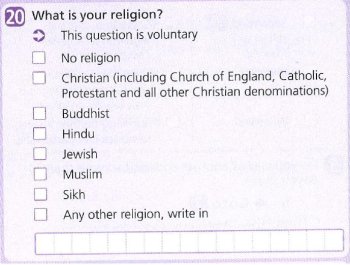 Questions in test surveys by the Government before the last Census revealed more people said they had no religion than the question chosen for the Census did.

In test surveys the question 'Which of these best describes you?' increased the proportion saying they had no religion compared with 'What is your religion, even if not currently practising?' followed by a list of religions. The difference was particularly noticeable in the test surveys where 'no religion' came first in the list of options.

The question used by the Office of National Statistics in the census was "What is your religion?" The reason they gave is that the formula had been used in the previous census so would give a more accurate indication of trends. This would however perpetuate any inaccuracies in the true figures of actively religious people.

It is not unusual for questionnaires and surveys to word questions in a particular way to produce a certain result. The existence of the Census test surveys appears to indicate that the Government chose the question that they expected to again produce the highest number of believers.

Terry Sanderson, president of the National Secular Society, said: "The results of the test surveys are being kept under wraps by the Government for some reason and made available only to a very limited number of bona fide researchers. But it is clear that the leading question that was chosen will continue to substantially overstate the level of religious affiliation in this country".