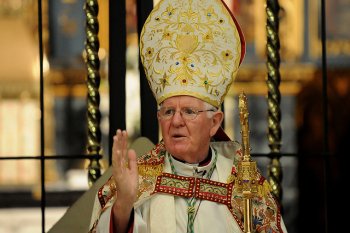 The Catholic bishop of Lancaster has said that the purpose of Catholic schools is to evangelise, and that if some schools have mainly non-Catholic pupils, then they have no purpose in the Church's "mission of salvation."

In a pastoral letter, Bishop Campbell said that in the light of falling congregations, the Church would have to urgently reassess those schools with large numbers of non-Catholic pupils and teachers. "Is it time for us to admit that we can no longer maintain schools that are Catholic in name only?" he wrote. "Faced with fewer priests and smaller congregations, where should Catholic parishes and schools of the future be located?"

Mgr William Kilgannon, vicar general in the local Diocese (Hallam), said that "schools are an important tool for evangelisation and provide an opportunity for non-Catholic children to become involved in the Catholic community."

Writing in the Catholic magazine the Tablet, Brendan Conboy, the headteacher of a Catholic school in the Lancaster diocese, says that in his own school the number of baptised Catholics is "falling rapidly" and is now less than half. Of the 130 staff he employs, he doesn't imagine that even half of them are Catholics and most of those are non-practising. Nevertheless, the school has a budget of £4.5 million, provided almost entirely by the taxpayer. Mr Conboy says: "Faith is caught not taught, as the cliché says, and the daily witness offered by the staff and students alike is a powerful tool for evangelisation."

There appears to be a degree of self-delusion in this statement as he readily admits that hardly any of the children go to church.

Terry Sanderson, President of the National Secular Society, said: "Bishop Campbell asks: 'Is it right or sustainable to expect our Mass-going population of 21,000 to support our schools and colleges in which often the majority of pupils, and sometimes teachers, are not practising Catholics?'

"This gives the impression that the Church pays a fortune to educate non-Catholics and employ non-Catholic teachers. The cost is undeniably huge. According to our calculations, the annual cost for in England and Wales of educating Catholic pupils (as defined by the Catholic Church) in Catholic maintained 'faith schools' is approximately £3.4 billion – from which the cost of educating children from non-Catholic families has already been excluded. Of course these pupils should be educated at public expense, but why are we paying for them to be evangelised?

"We've been saying for years that the primary purpose of religious schools' is the promotion of sectarian religion, and at last we have priests who are prepared to admit it openly. So who is paying for this indoctrination? Despite the bishop's disingenuous words, it is of course the taxpayer, not the Church, whose contributions are infinitesimal in comparison.

"As with the Church of England, the Catholic Church in Britain is dying on its feet. It's time the Government recognised that there is a difference between those Catholics created when they were babes in arms and those who, as adults, have made their own decision not to be involved with this reactionary and regressive institution."