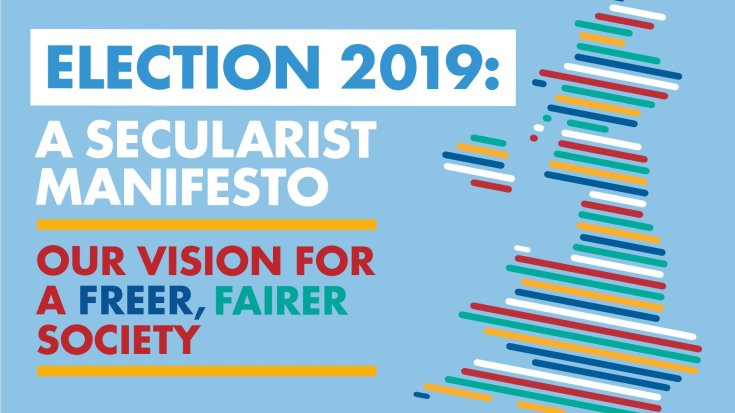 The 11 policy proposals below would promote a freer, fairer society where everyone has common rights and responsibilities regardless of religion or belief.

No more faith schools.
Children from all faith and belief backgrounds should be educated together.

Faith schools have a negative impact on social cohesion, foster segregation of children on social, ethnic and religious lines, and undermine choice and equality. They also enable religious groups to use public money to evangelise to children. Children from all faith and belief backgrounds should be educated together and allowed to develop their own beliefs independently. All parts of the UK should therefore move towards a secular and inclusive education system. A pledge not to open any more state-funded faith schools would be a tangible first step towards building a more inclusive and cohesive society.

End religious discrimination in school admissions.
No child should be discriminated against because of their parents' religious beliefs.

Yet Equality Act exemptions permit many faith schools to give preference to children from families that share their religion. They can even choose to give preference to families from any religion over those with none. One of education's most powerful features is the ability to bring people together and to open opportunities for our children, no matter their background. What sort of message do our schools send when they discriminate based on religion? Faith schools should be stripped of their ability discriminate against pupils in admissions ­– and against teachers in employment, too.

Abolish the collective worship requirement.
No child should be compelled to worship in school. Acts of worship should be replaced with inclusive assemblies.

The law requiring children at all maintained schools "on each school day take part in an act of collective worship" is as ridiculous as it is outdated and unjust. Northern Ireland and Scotland have similar laws. Even in schools with no religious designation, the worship must be "wholly or mainly of a Christian character". Laws that impose worship in publicly funded schools are an anachronism and need to go. Instead, there should be a duty on schools to ensure that assemblies are respectful and inclusive of all pupils, regardless of their religion or belief, including non-belief. The same should apply to religious education which should be suitably reformed to ensure it is never used to indoctrinate or promote a particular worldview.

Promote free speech as a positive value.
A healthy democracy is underpinned by the fundamental human right to free speech. It should be protected.

The conflation of criticism or mockery of religion with 'hate speech', coupled with a burgeoning culture of offence, is threatening everyone's right to speak freely. Parties should begin by rejecting calls to adopt a definition of Islamophobia that defines it as "a type of racism that targets expressions of Muslimness or perceived Muslimness". The law already protects individuals against attacks and unlawful discrimination on the basis of their religion. Rather than helping, this definition is likely to create a climate of self-censorship whereby people are fearful of criticising Islam and Islamic beliefs.

End non-stun slaughter.
The religious exemption from animal welfare laws should be repealed.

The next government should stop allowing religious considerations to compromise animal welfare. The religious exemption that permits certain religious groups to slaughter animals without prior stunning should be repealed. Ending unnecessary pain, suffering and distress to animals is a reasonable justification for restricting religious freedom. In the absence of a ban on non-stun slaughter, clear method of slaughter labelling requirements should be introduced to ensure consumers can avoid meat from inhumanely slaughtered animals if that's their choice.

Review laws on assisted dying.
Decisions over assisted dying should be based on autonomy and medical ethics, not religious dogma.

The law banning people facing intolerable and incurable suffering, including the terminally ill from being helped to end their lives must be reviewed. The debate over assisted dying in the UK is still unduly influenced by religious dogma. Those with theological objections to assisted dying routinely couch their arguments in secular language, amplifying misleading arguments against it. A full review needs to cut through this and reach conclusions based on evidence, compassion, ethical principles and respect for patient autonomy.

End all forms of non-consensual genital cutting.
Protections given to female children under laws prohibiting FGM should be extended to all children.

Male and intersex children should be equally protected against non-therapeutic, non-consensual genital surgery. No-one, regardless of age, sex or religious or cultural background, should undergo non-therapeutic surgery without their express consent. Religious freedom isn't a licence to violate the rights of others.

Outlaw caste discrimination.
Discrimination based on the idea of ‘caste’ should be prohibited.

The next government should ensure there is appropriate and proportionate legal protection against unlawful discrimination because of a person's perceived 'caste'. The research tells us that significant number of people living in the UK are at risk of caste discrimination. Adding 'caste' to the list of protected characteristics under the Equality Act would ensure that caste-based discrimination is explicitly prohibited under UK law and that victims of this form of discrimination have access to effective remedies.

End 'the advancement of religion' as a charitable purpose.
All charities should be required to demonstrate a tangible public benefit.

Religious activities do not provide an inherent benefit to the public and can sometimes even cause harm. Removing 'the advancement of religion' as a charitable purpose would not prevent religious organisations from enjoying charitable status. It would however require them to demonstrate a tangible public benefit under another charitable purpose heading, such as the relief of poverty, the promotion of good health, saving lives and protecting the environment etc.

Where religious organisations join others in delivering public services, they should be obliged to do so without discriminating against their employees; withholding services from users on the grounds of religion or sexuality; or proselytising when delivering that service.

Separate church and state.
An official state church has no place in a diverse 21st century democracy.

The next government should disestablish the Church of England and abolish the automatic right of Anglican bishops to sit in the House of Lords. A national religion which retains unique privileges is archaic and unjust. Removing all symbolic and institutional ties between government and religion is the only way to ensure equal treatment to citizens of all religions and none. The UK's constitution is likely to come under scrutiny in the next parliament. The time has come to get on with it.

The latest NSS podcast is a general election special. The team discuss its Secularist Manifesto, for a freer, fairer society, and which of these proposals could be seen under the next government.
Share this episode

In the latest episode of the NSS podcast the team discuss the Secularist Manifesto, 11 policy proposals to promote a freer, fairer society where everyone has common rights and responsibilities regardless of religion or belief.
Share this episode