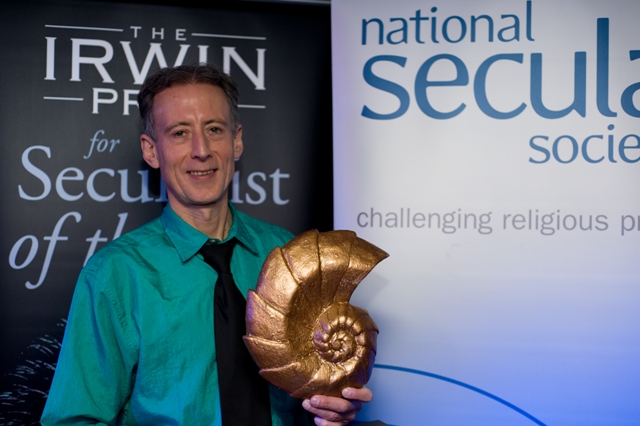 Secularism – the separation of religion and the state – is a vital precondition for democracy, equality and human rights. It protects people of all faiths and none; creating a level playing field where no religion has legal privilege and no faith can abuse its influence to victimise people of different beliefs.

Peter Tatchell is an Australian-born British political campaigner best known for his work with LGBT social movements and the work of his human rights' group the Peter Tatchell Foundation.

"We are very pleased to have been able to reward Peter's lifelong commitment to human rights and to honour his support for a just and inclusive secular society. He has been active in many progressive campaigns over the past forty or more years, not least in gay rights, and has had to endure much public and press abuse because of it.

"But he has persevered and now he has made the unprecedented transition from public enemy number one to national treasure."

"I feel very privileged and honoured to receive the Irwin Prize. However, compared to the heroism of secularists and humanists living under religious fundamentalist regimes, such as Iran and Saudi Arabia, my own efforts are quite insignificant. I salute their courageous, inspiring work in defence of rationalism, scientific knowledge, freedom of expression and human rights."