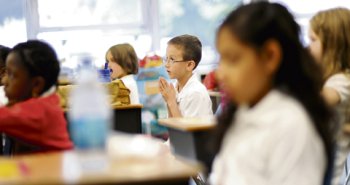 Every pupil should have the same basic entitlement to non-partisan education about religion and belief, the National Secular Society has said in a submission to the Commission on Religious Education.

The Society said that significant reform of RE was needed to make sure learning about religion and belief covered a "broad spectrum of human ideas and thought", including religious and non-religious worldviews.

The Commission, established by the RE Council of England and Wales, is reviewing the "the legal, education, and policy frameworks for religious education" with the "ultimate aim … to improve the quality and rigour of religious education and its capacity to prepare pupils for life in modern Britain."

In its response, the NSS criticised existing arrangements which means local faith groups determine the content of RE, calling this approach "arbitrary and unfair".

The NSS submission said the content of any subject covering religion and belief should be determined by the same process as other subjects, reasoning that there was "no educational or social rationale" for the subject to uniquely 'reflect local circumstances'.

The NSS also criticised the special arrangements for faith schools' which allows them to teach the subject form their own perspective, saying this undermined the academic integrity of the subject. "All pupils, regardless of the school they attend, should have the same entitlement to learn about religion, beliefs and philosophy in an impartial way", said the submission, which also called for all schools, including faith schools to "have their religious education teaching inspected by Ofsted, and not by inspectors appointed by their governing bodies in consultation with 'religious authorities', as is current the case."

Parents are currently able to withdraw their child from religious education, a right the National Secular Society supports while the subject is taught unevenly across the country, with locally-agreed syllabuses and in an often confessional manner.

But, if the subject is "suitably reformed" to become a "truly impartial, objective and balanced academic subject, then the parental right of withdrawal could be reviewed," the NSS submission said.

The submission called for these points to be emphasised in teacher training, so that no teacher "should leave training thinking it is ever appropriate for them to teach or promote their own religious beliefs to children."

RE is often taught by non-specialists and given a low priority, creating "an ideal environment for evangelical groups to exploit", the NSS warned.

Stephen Evans, campaigns director of the National Secular Society said, "This area of learning should no longer be unduly influenced by religious groups and vested interests, as has traditionally been the case"

"Britain today has incredible religious diversity but is also less religious than it has ever been. Our education system should reflect that, so pupils leave school equipped to understand religious and non-religious points of view. But that can only happen when RE stops being used by some as an opportunity to evangelise. A proselytising approach to religious education robs children of the impartial, balanced curriculum they deserve."