Alex Salmond: “I prefer people of faith to people of no faith” 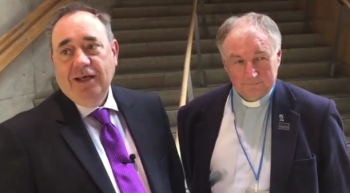 The National Secular Society has criticised the former First Minister of Scotland Alex Salmond for his "divisive rhetoric" after he stated that he prefers religious people to atheists or apostates.

The National Secular Society's spokesperson for Scotland, Alistair McBay, commented; "It is appalling that such a leading politician should make remarks like this in 21st century Scotland. Imagine the outcry if he'd said he 'preferred' Protestants to Catholics.

"It is a sad day for half the Scottish population degraded by the former First Minister's prejudice."

Salmond added that "all denominations have a key role to play in society and we are very fortunate in Scotland because we have a tremendous ability, among religions and denominations, to come together and support good causes."

Reverend MacQuarrie, after Mr Salmond made his remarks, said that "regardless of what religion and belief position people hold we're human beings".

He added, "It's important that we see each other as people, not with labels."

Mr Salmond was speaking just days after new research found that over 47% of Scots have no religion, an increase from 40% in 2009. A separate study, also released this week, found that just 55% of Scots have a "favourable" view of Christianity.

Within minutes of praising "unity" and "diversity" Salmond said that he was "biased" in favour of the religious.

Mr Evans added: "Alex Salmond's divisive rhetoric will dismay the 47% of Scots who have no religious faith and indeed anyone interested in building a tolerant and inclusive Scotland. His comments are unworthy of a politician of his stature."