Catholic Church child abuse cover-ups: Vatican justice is no justice at all 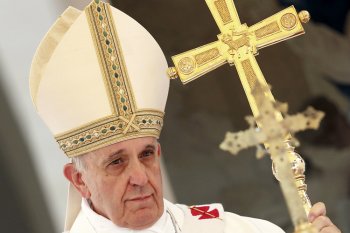 The National Secular Society has dismissed Pope Francis' new tribunal to hear the cases of bishops implicated in covering up child sex abuse as a "PR stunt" and has accused the Vatican of continuing to assist clerics escape justice over child sex abuse allegations.

NSS executive director Keith Porteous Wood insisted "Vatican justice is no justice at all" and once again reiterated the organisation's call for secular law enforcement authorities to investigate and prosecute cases against clerics involved in covering up child sex abuse cases.

Mr Wood said: "The Vatican is yet to demonstrate it has any interest in subjecting clerics suspected of child rape to justice, far less doing so for bishops who have abetted it.

"The Church, without censure from the Vatican, continues to resist every criminal or compensation case as strongly as possible, even when it knows the perpetrator to be guilty, and both shamelessly refuse to volunteer evidence of suspected guilt to secular justice authorities. This compounds the abuse of victims.

"The latest suggestion of a tribunal to make bishops more accountable is a further cynical attempt to justify them evading secular justice for child endangerment or similar offences.

"The Vatican denied extradition of former nuncio Josef Wesolowski to both his native Poland or the Dominican Republic, where he was alleged to have committed child abuse offences, on the grounds that a trial would take place in the Vatican, but presumably without prosecution witnesses. The alleged fugitive was whisked back to the Vatican out of reach of prosecutors of either country and was seen shortly afterwards walking freely around the streets of Rome.

"The landmark conviction at Pennsylvania's Supreme Court of Msgr. William J. Lynn made him the first Catholic Church official found guilty of child endangerment for his role supervising priests in the clergy sex-abuse scandal – after a rigorous defence paid for by the Catholic Church."

The tribunal comes after strong condemnation from the United Nations over the Vatican's failure to tackle child abuse and for the Church's long history of covering up the sexual abuse of children by many of its clerics.

Mr Wood added: "The Vatican has refused to implement any of the suggestions made by the UN Committee on the Rights of the Child relating to child abuse. This is another indication of their complete resistance to seeing justice done."

The Church tribunal will be given powers to judge bishops accused of covering up sexual abuse of minors and will fall under the authority of the Congregation for the Doctrine of the Faith.