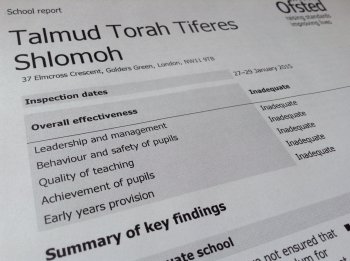 An Independent Jewish faith school has failed all five Ofsted assessment criteria and been branded "inadequate" for its "narrow" focus on religious studies and students' lack of basic skills.

Pupils in some older cohorts were found to be "five years behind" the national average, and fundamental skills like maths and literacy were "significantly behind" national standards.

Ofsted found that insufficient time was allowed for students to "develop their literacy and mathematical skills" and that pupils had "minimal or no opportunities" to develop understanding of "technological, scientific, human and social and aesthetic and creative subjects."

Pupils attend the school for six days every week, and "the majority of the school day is taken up with Jewish religious studies (Kodesh), which are taught in Yiddish."

The report concludes: "The curriculum is narrow, primarily because the school's aim is to secure a place for every pupil at a yeshiva (Jewish religious college) at the age of 15. As a result, pupils spend most of the time in school learning Jewish Studies. The rest of the school day involves pupils learning a very restricted set of secular subjects, resulting in inadequate achievement for all groups of pupils."

The school, Talmud Torah Tiferes Shlomoh, has an ultra-Orthodox Jewish ethos, and was previously rated "good."

The most recent report states that students: "spend a significant amount of time learning to read in Hebrew to the detriment of developing their ability to read in English."

While pupils were able to read, they lacked "intonation, expression and fluency when reading in English."

Pupils were found to have "no appreciation of authors" and were "not able to talk about different kinds of books."

Ofsted said reading books at the school "are scruffy and dog-eared" and "do not inspire pupils to develop a love of reading."

Deficiencies were also found in the way the school measured children's attainment, and the report concluded that most subjects were not tested sufficiently, except Jewish religious studies where "progress is regularly tested."

Furthermore, Ofsted reported that "pupils do not have the opportunity to work scientifically. They are not able to use tools and equipment, because there are no technology lessons. There is a dearth of experiences to develop pupils' aesthetic and creative skills in, for example, art, music or drama. Physical education is too often restricted to playing football, mainly at break times."

The snap Ofsted investigation found that "pupils are not informed about other cultures and religions" and were "inadequately prepared for life in modern Britain."

There were also serious concerns raised about the students' lack of knowledge about online risks, and Ofsted fund that pupils were "not able to keep themselves safe" online.

The report states: "The ethos of the school means that pupils are only taught about physical and verbal forms of bullying. They are not taught about e-safety, including cyber-bullying and the potential dangers of the internet. Neither are they provided with drugs or sex and relationships education, or able to discuss issues around homophobic bullying."

In 2010 the school was rated "good" and was praised for its religious education. The 2010 report said "the well-planned kodesh curriculum is a major feature of the school's provision. Consequently, a spiritual ethos permeates the whole school. The school successfully promotes the progression of knowledge, skills and understanding of all relevant aspects of the Jewish religion."

Five years ago, Ofsted found pupils' "spiritual, moral, social and cultural development" to be "outstanding." Now, however, Ofsted reports that the school is inadequate in all areas and that "the curriculum is too narrow. The majority of teaching time is spent on Jewish religious studies."

Ofsted inspections of faith schools have been heavily criticised in recent months, after a string of schools failed or were downgraded. The executive director of the National Association for Orthodox Jewish schools said that Ofsted "used insensitive and inappropriate questions with faith schools" and accused inspectors of using "secular standards."

Stephen Evans, National Secular Society campaigns manager, said, "The goalposts have clearly moved for religious schools. But complaints that they are being unfairly targeted are nonsense. All schools, including faith-based schools, should have been preparing students for life in the real world already.

"The real scandal is that a school in 2010, that left some pupils five years behind their peers by 2015, was rated as 'good' at all. Clearly the fixation with religious education has been extremely detrimental in this school, and the many others that have been downgraded.

"Pupils should receive a thorough education, regardless of the school's religious ethos. The rights of the pupils are the most important issue at stake here."

The full Ofsted report can be read here