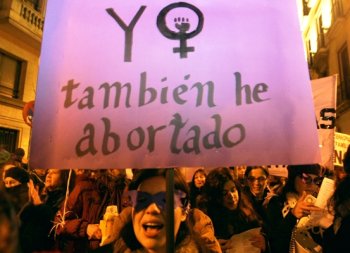 The Spanish Government is preparing a reform to the country's abortion law that, some have argued, will return Spain to a situation similar to the one that existed under General Franco's dictatorship.

Whilst the government denies that its proposed reform comes in response to pressure from the Catholic Church, its announcement of the reform came just hours after the head of Spain's Catholic Church, Cardinal Antonio Maria Rouco Varela, called for an "urgent reform" of the current law, dating from 2010.

At present in Spain, women can have an abortion up to 14 weeks without having to provide a reason, up to 22 weeks if there is a risk to the mother's health or when two doctors say the foetus has severe abnormalities.

The new bill, which has yet to be presented to congress, will not only do away these time limits, but also, according to an interview given by Spain's justice minister, Alberto Alberto Ruiz Gallardon, to the Spanish newspaper La Razon, it will not include malformations of the foetus as a reason for interrupting a pregnancy. The minister said: "I don't understand why the foetus should be unprotected, allowing it to be aborted, just because it suffers some kind of disability or malformation". He has also said that "risk to physical and mental health cannot be considered as a pretext to not protect the life of a newborn".

The right wing Popular Party has also promised that those under 18 would need the permission of their parents for a termination.

Spain's Socialist opposition party, PSOE, is one of many to have claimed that it is the Catholic Church who is behind the reform; Elena Valenciano, the party's vice president, has stated that PSOE will downgrade its relations with the Vatican if more rules such as this one are introduced. She argued: "We can't accept that bishops continue to impose their moral position on the [Spanish] people".

The vast majority of Spaniards, 81%, are against banning abortion in cases where a foetus is malformed, according to a poll published in July 2012 in the Spanish newspaper El Pais.