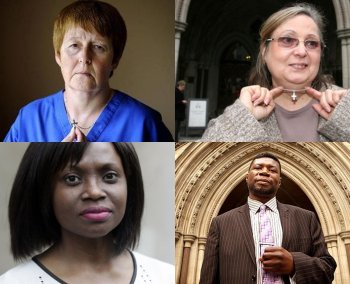 The European Court of Human Rights has rejected three of the four landmark cases of alleged religious discrimination in the workplace. It upheld one case, Eweida v. the United Kingdom, in which Nadia Eweida claimed that uniform policy violated her human rights as a Christian. In this instance the court ruled that her employer, British Airways, failed to correctly balance her right to manifest her religion with their right to project a corporate image.

In all four cases Christian applicants complained that UK law did not sufficiently protect their rights to freedom of religion and freedom from discrimination at work. The ruling, while protecting the right to manifest religion at work, makes clear that these rights must be balanced against rights of others.

The National Secular Society was the only organisation that intervened to support the UK Government (pdf) to argue that all four cases of Eweida, Chaplin, Ladele and McFarlane were correctly dismissed by the UK courts. The European Court of Human Rights has today largely upheld those decisions.

"First and foremost, this ruling demonstrates that UK equality law is fully compatible with the European Convention on Human Rights and that there is no need to change UK law. Any attempt to do so by the Government would therefore signal a clear desire to give privileged treatment to religious believers, and would be robustly challenged.

"In the cases of the registrar who refused to conduct civil partnerships and the counsellor who wouldn't counsel gay couples – the principle of non-discrimination against gay people has been upheld. If they had won these cases, it would have driven a coach and horses through the equality laws. The rights of gay people to fair and equal treatment would have been kicked back by decades.

"It is always better if employers can reach some kind of accommodation with their staff on these issues, and in the vast majority of cases, they do. But when employees refuse to carry out the duties that their job entails, it is reasonable for employers to discipline them. Religious people who feel elements of their job go against their conscience can always find employment that better matches their needs. That is true religious freedom.

"In the case of Eweida, it is a very limited victory which simply means that if employers want to prevent an employee wearing religious symbol for corporate image purposes, they must prove that their image is negatively affected by such manifestations of belief. In the case of Chaplin we are pleased that the court has acknowledged that employers are better placed than the court to decide if jewellery is a health and safety risk and did not support the idea of blanket permission to wear religious symbols in the workplace."

Read the ruling in full:
JUDGMENT - CASE OF EWEIDA AND OTHERS v. THE UNITED KINGDOM

Also read this blog, by Darren Newman, which reinforces our contention that these supposed "religious discrimination" cases are being created and manipulated by evangelical groups and individuals in a deliberate attempt to mislead the public and politicians.

See also: Ruling on Christian's right to wear cross 'does not trump other human rights'