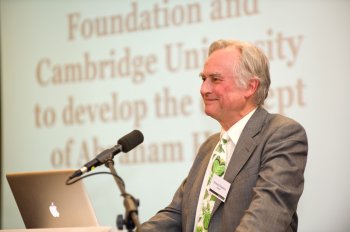 The National Secular Society's "Secularism 2012" conference — held in London last Saturday — was pronounced an outstanding success by delegates from all over the country and around the world.

The 600 people who attended were treated to presentations from some of the most stimulating and exciting speakers in the secular movement. A standing ovation was given to Maryam Namazie for her spirited contribution calling for curbs on the application of sharia law in arbitration – and for the protection of women's rights in the face of rising religious fundamentalism.

There was great anticipation for the talk by Richard Dawkins, and he did not disappoint his many fans when he delivered a cutting satire on Tony Blair's "Faith Foundation". He also pointed out the glaring foolishness of Mormonism – the religion of a potential President of the United States.

Professor Ted Cantle, in his presentation, said that multiculturalism had failed and proposed a new way forward for community relations – what he called interculturalism. This would remove the power of "faith leaders" to claim to speak for whole communities of people who were, as a result, unable to make their real opinions known. He said such leaders were the gatekeepers of their communities – but gatekeepers who aimed to keep people locked in rather than letting them out to participate as full citizens in society. The Government had empowered this separatism by funding community projects based on race or religion that encouraged people to remain isolated. This must end, he said.

Pragna Patel said it was important for women in ethnic and religious communities to have a "secular space" they could come to if they were being abused. Groups like Southall Black Sisters, which she co-founded, provided such space, but were constantly being threatened by withdrawal of funding.

Peter Tatchell — winner of this year's Secularist of the Year prize — made the point that religious organisations were now one of the greatest abusers of human rights around the world. He praised secularism as inclusive and tolerant and a way forward for believers and non-believers alike.

Nick Cohen made an impassioned plea for free speech and encouraged us to remain steadfast in its defence even in the face of threats and menaces.

MP Nia Griffith, Labour's shadow Welsh Minister, wanted to know why so little progress had been made in parliament to progress to a secular society. She acknowledged that most MPs were not averse to secularism, but were, all the same, reluctant to support any overt secularist legislation. Often the excuse was that "there are more important things than disestablishment".

The atmosphere at the conference was buzzing with excitement at the prospect of the secularist agenda achieving an increasingly high profile. And the presence of so many students gave hope for an even more vigorous future for the ideas being promoted at the conference. Over a hundred people signed up for membership of the NSS.

The atmosphere was good-natured and united (although one clerical collar was spotted among the participants – and its wearer not very sympathetic, by all accounts).

The event ran seamlessly thanks to the careful planning by NSS vice president Gerard Phillips, the conference organiser. He was helped by an army of volunteers who diligently looked after the delegates.

As one delegate said: "I've met more interesting people here today than I have in the whole past year put together. It's been so exciting. Roll on Secularism 2013."

Listen to the speeches at the Pod Delusion

See the photos from the conference

You can also see the conference from a bloggers perspective at the Something Surprising and atomies blogspots.